I've been working on a load of small projects lately and the latest has been the most challenging. I need some 1:285th scale flags for my Desert Raiders project. OK Maybe I don't need them, but I wanted them and that's pretty much the same thing to most wargamers. "This will be easy" I said to myself...oh how wrong I was! 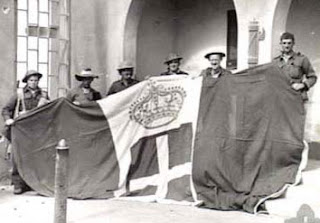 The First step was to find a good representation of the Italian Army flag for the period. There are plenty of examples on the Internet so that didn't take long - just be sure to get the right flag. The Italian national flag changed after 1946 when Italy became a Republic. There are also two versions used prior to this date during WWII, the Civil or National flag and the War Flag for use by the Army (with a crown above the central shield). I wanted the National flag because mine are for the Italian civil administration buildings.

I wanted my flags to droop and fold realistically (or as close as I could get) so I found some thin paper to print them on. However after several tests I found that the paper tore or fell apart when glued so in the end I went with regular 80gsm printer paper. I made several different sized flags aiming to keep them 1:285th scale but still big enough to be able to see. Fortunately I found several wartime photo's on-line showing captured flags that ranged from 6ft to 20ft in width which gave me some latitude with which to work.


The base and flagpole is simple a little section of wooden coffee stirrer stick and a dress pin (nicked from the wife's sewing box!). I doused these liberally in super-glue to bond the pole and base together but also to coat the shiny steel pin prior to painting with my normal Vallejo acrylics.

Then I tested the best way to make the flags malleable and easy to crumple and fold. Soaking the whole flag made the paper soft but also made the colours run so in the end the best method was the simplest; just glue the two halves of the flag together with a minimal amount of PVA and then fold using my finger nails. Once dried I then trimmed any white edges off with tiny make-up scissors (don't tell the wife!). Once everything was dry I followed my normal procedure of spraying with GW Purity Seal varnish and then Testor's Dullcoat to finish.

These were very fiddly to make but great fun and I'm really happy with how they look once finished. Utterly unnecessary for the game of course.
Posted by BigLee at 15:36