I've managed to get myself organised this month and have found some time to read (and paint) after a very dry spell over the summer. I have only fully read one book this month, but have dipped into many others as my Desert Raiders side project gets into full swing. Hopefully I'll have a few recommendations and reviews of these ready for next months roundup. 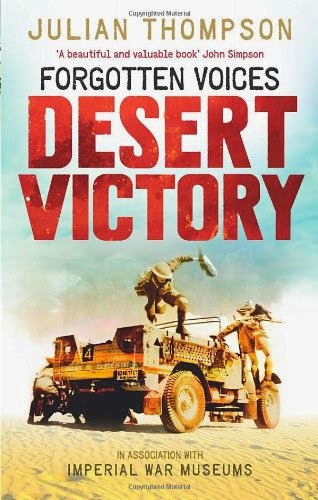 
The Forgotten Voices series of books have been published for some time now and this for me is one of the best in the series. Covering the full extent of the war in North Africa starting in the lead up to the Italian Invasion of Egypt in 1941 through to the defeat of the Heeresgruppe Afrika (Army Group Africa) in Tunisia in 1943.

The book is divided into sections dealing with the various phases of the war and within each the stories of the veterans have been cut and laid out in chronological order in order to tell the story of a particular action or series of events without jumping back and forth in time. Many of the Veterans served in the same units or in units that were supporting each other and it is fascinating to see how two different memories of an action can vary so much. While one veteran describes a retreat as panic and chaos another describes what seemed to him to be a leisurely drive back to friendly lines.

As with previous books in the series there is deliberately little analysis of the events by the author, relying on the words of the veterans to tell the story. They tell of a campaign of highs and lows that raced back and forth over vast distances. Their words tell of everyday hardships, the mental strain of boredom interspersed with moments of utter terror, of endurance, suffering and sudden random death but also of humour, adventure and comradeship.

Some of the stories in this book have been repeated elsewhere and have become quite familiar from other works, but much of the content is original and I have not seen it before. As with many such books there is a clear absence of German or Italian voices in the collection. They are not completely absent but there were not nearly enough to give a rounded view of the war. Where they were features I felt that they added a lot to the picture being described and I their general absence diminished the overall book. Having said that the accounts collected here represent a huge and important undertaking that tells the story of the North Africa Campaign from a soldiers point of view.