Following on from yesterdays pictures from SELWG I guess I'd better post a picture of my purchases from the show. After all everyone else has! I didn't spend a lot this year but I was determined to be disciplined in my spending and went with a very detailed list of 'wants'. Unfortunately I was only able to get some of the stuff I needed. 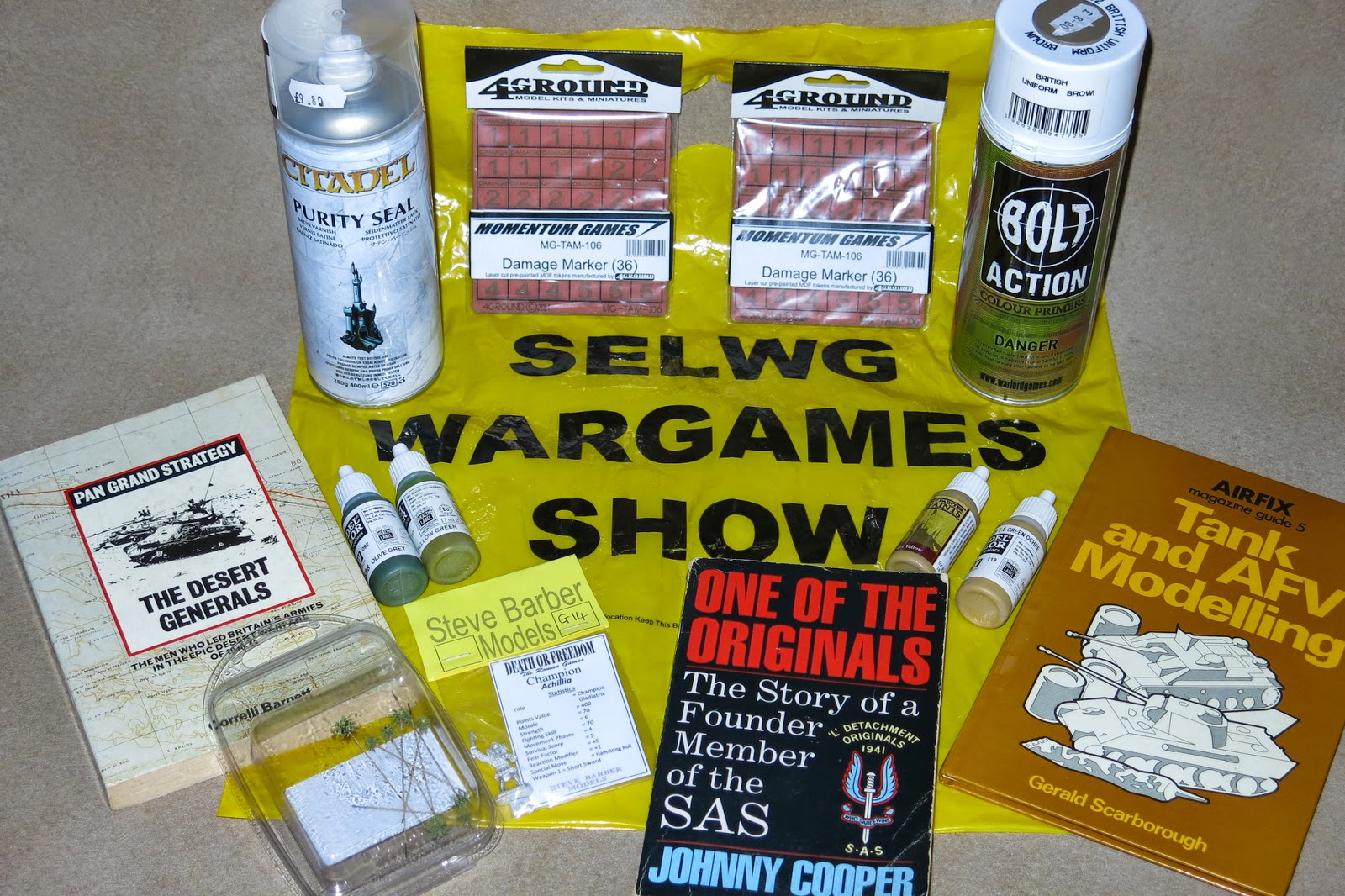 Everyone has their core set of consumables that they can't work without. For me that means Purity Seal spray varnish. I use this on all my figures as the first of three varnish layers (two layers of Purity Seal for durability and a final layer of Dullcoat to kill the shine). I probably should have picked up two cans because I get through a lot of this. I also bought some Bolt Action coloured primer. I've fallen in love with this stuff over the last year and now I couldn't do without it.

I had several new Vallejo colours on my list - specific to painting WWII Italians in Tropical Uniforms - and I was able to get them all at from Tole Haven.  My one impulse purchase was some 4Ground Damage Tokens from Colonel Bills. These have only just been released apparently. I also bought another pack of Palm Trees from Timecast. I'll be using these for some scenic bases to use in my desert games.

No show would be complete without buying a few books and this year I had a couple of Ospreys in mind. Unfortunately I couldn't find these on the Lanchester Books stand (maybe next time) but I did find a couple of random books from a trader up on the Concourse. Desert Generals and the Airfix magazine Guide Tank and AFV Modelling were just £1 each, so I could hardly not buy them! I also acquired One of the Originals, a book about the founding of the SAS. A special thank you must go out to Clint (of Anything But A One fame) who brought the book to the show for me with my current project in mind. You are a Gentleman and a Scholar sir!

My last acquisition of the day was a Steve Barber Gladiator model. This was my prize for winning the chariot racing participation game run by Crawley Wargames Club. Thanks guys, I had a blast and it was great way to end my day at SELWG.

So I went home with some of my list fulfilled but with none of the aircraft models I needed for the continuation of my Desert Raiders project. So I placed an order with H&R for some Italian Bombers and Fighters and a dozen Lancia Trucks. I also bought some German Motorcyclists just to see what they look like. I want to make up an Italian Motorcycle Platoon but can't find any suitable models, but I may be able to substitute these Germans and just paint them as Italians... hell, at 6mm nobody will know the difference!
Posted by BigLee at 09:16