I'm very aware that I keep giving out five stars to many of the books I read but rather than being a reflection of my own low standards of marking I think its a reflection of the vast wealth of excellent military history books available these days. I only have two to review this month, but both are excellent in different ways and I think both are well worth seeking out and reading. 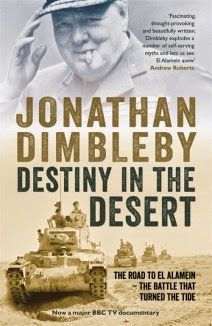 I very much enjoyed the two part TV documentary on the build up to El Alamein presented by Johnathon Dimbleby a few years ago, so when I saw this book I decided it would be worthwhile buying. There has been a growing trend in recent years for BBC correspondents to reinvent themselves as TV presenters with varying degrees of success. Johnathon Dimbleby's venture into this field however works very well, mainly I think because he brings his many years as an experienced front line political correspondent to this subject. He also has a personal connection to the events as his father Richard Dimbleby was also a correspondent for the BBC and was posted to the middle east for the duration of much of the time covered by the book. The result is no mere retelling of the Desert Campaign but an in depth analysis of the personalities, decisions, conflicts, mistakes and realities of war that lead to the turning point at El Alamein.

Johnathon Dimbleby has managed to look at the events of 1941-42 in a way that shows the 'big picture' while maintaining the freshness of a news report. From a military history perspective this book is more about politics than martial events but reading it helps one to understand the context of the Western Desert Campaign in a way that few other books manage to achieve. The political machinations of Churchill - both his great insights and personal drive and his appalling interference in military affairs - are discussed in great detail. I felt I knew the conflict in Egypt and Lybia very well but found myself discovering new perspectives and shocking details with almost every turn of the page.

One such revelation has entirely changed my estimation of the supposedly great Desert Fox's ability to out-think his British counterparts. In 1940 a new military attache to the U.S. embassy in Egypt was tasked with the duty of monitoring and reporting on British military operations in the region. He dutifully reported everything he learnt about British “strengths, positions, losses, reinforcements, supply, situation, plans, morale etc” to his superiors in American intelligence. But the code being used to encrypt the reports had been compromised and Axis intelligence were able to read the reports and within a matter of hours copies were in the hands of Adolf Hitler, Benito Mussolini, and more importantly, Field Marshal Erwin Rommel. This massive security blunder handed Rommel an Ace card in a high stakes poker game in which he was already a daring and dangerous gambler. British generals were often amazed at Rommel's 'instictive' ability to read the battlefield and exploit weaknesses...it turns out there was nothing instinctive about it and this was more often than not intelligence lead opportunism.

This German intelligence bonanza came to an end when British cryptologists at Bletchley Park discovered the security leak sometime around the middle of 1942. The Americans were mortified at the realisation that their intelligence gathering had landed in the hands of the Axis leaders and quickly changed to a newer tougher code for all communications. At the same time Bletchley were feeding their 'Ultra' decrypts of German signals to the British high command and by the end of 1942 - in time for the Battle of Alam Halfa and 2nd Alamein - the tables had been completely and decisively turned on the Axis forces.

This is a really good book which I found to be very easy to read and all the more enjoyable for it. As a political correspondent Dimbleby brings a clarity and perspective to the subject matter that avoids the dry and sometimes clinical approach that other authors often fall into. He presents the North African campaign in context and clearly shows that this was no mere side show to the bigger conflict but was actually a vital stepping stone in the destruction of the Axis war machine. There are quite a few wartime diaries and recollections now in print and more are being discovered all and published all the time. Many are interesting but poorly written and in dire need a good editor and or a ghost writer! This isn't the case with this book as Trevor Greenwood was both a prolific and quite talented writer and this comes across immediately on reading the first entries in his own war diary. Officially keeping such a diary was banned so the author was taking quite a risk writing down his daily adventures but he did so for the entire duration of his active service, right up until he was demobbed in later 1945.

Greenwood writes with a touching humility and humanity despite the horrors he witnesses and although he is clearly under extreme stress at different times, he never looses his sense of humour and wit. Just prior to his departure for France he writes anxiously to his wife and alternately frets about the delays in embarkation and nervously about what the next few days will bring.


"...issue of 'Mae Wests' this morning, plus two 24-hour ration packs per man. Also vomit bags: found I had been given three of the latter. Do I look like a good vomiter?"

In some places in the book where it feels like there is a lack of pace in the writing, but one has to remind oneself that this is a day to day account of his time in Europe and most of a soldiers time is spent waiting around interspersed with brief and terrifying periods of activity. Trevor describes it all; the boredom and monotony of waiting; the impossibly huge air raids and deafening artillery that shock the very ground; the confusion and chaos of battle; the lice, mosquitoes and occasionally moles that disturbed his sleep; the weather that seemed to make life in the field so much harder; letters from home that raised his spirits and the deaths and injuries within the Regiment that reminded him of his mortality. Throughout it all though you never once feel that he feels sorry for himself. True, he talks a lot about missing his wife and baby son (writing to them almost on a daily basis) but he is clearly resigned to his duty and determined to see it through to the end, one way or another.

If you enjoy reading the book (and I think you will) then you will also enjoy the excellent collection of associated material that has been gathered together in a dedicated website One Day at a Time: The War Archive of Trevor Greenwood. Here you will find many of the letters he wrote home, photos from his service years and other documents from his time in the army.
Posted by BigLee at 06:59