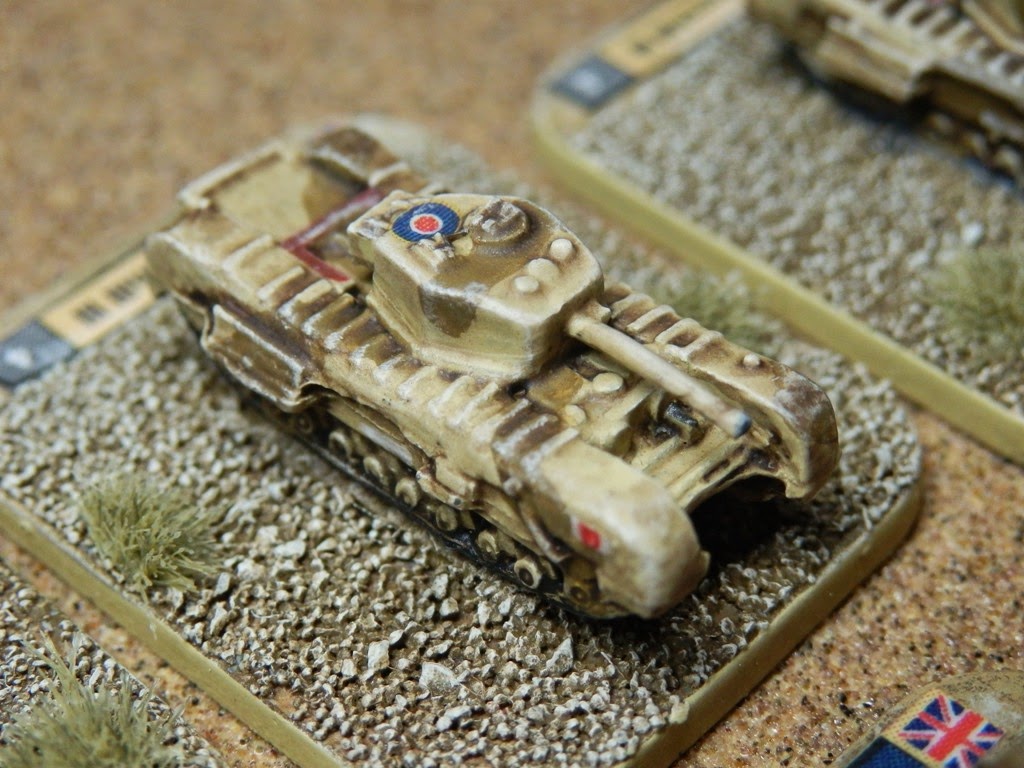 I've been plodding away working on a lot of new support platoons for my 6mm North Africa 1942 project. First off the production line are two platoons of Churchill Mk III's which were deployed to Egypt in late 1942 for operational evaluation as part of what became known as Kingforce.

Just a few weeks before the launch of Operation Lightfoot (the 2nd Battle of Alamein) in October 1942 the 8th Army in Egypt received a special delivery of a 'new' tank. Six Churchill Mk III's under the command of Major Norris King MC were to be deployed for a limited period to see how they stood up to the rigours of desert warfare. The Churchill Tank had already debuted rather disappointingly at Dieppe in August but lessons were quickly learnt and improvements were already being implemented. The six tanks sent to North Africa were reworked tanks (as indicated by their serial numbers having the suffix R) but it was unclear if the cooling systems of the tank were sufficient for the desert theatre.

After their arrival in Egypt the tanks were quickly serviced, painted in desert camouflage and almost immediately shipped towards the front. Surprisingly none of the officers and NCO's had previous experience with this tank but all of the crews had shipped from the UK with their vehicles and knew their jobs well.

Kingforce was attached to the 1st Motor Brigade and arrived in time to take part in the Second Battle of Alamein. The Churchill Mk III's acquitted themselves well and their tough reputation was quickly established with all the tanks being hit multiple times with only one loss. The destroyed tank had been hit no less than 50 times with only three penetrations which unfortunately killed the commander Cpl Kelly Appleby and three crew. Despite this setback the reputation of the Churchill was beginning to be established. A few days later Kingforce was back in action again in the vicinity of Kidney Ridge. They encountered very heavy fire but despite numerous hits none were destroyed. One tank was hit over 30 times with little more than a broken track to show for it.

Many lessons were learnt from this operational experience and several changes were implemented as a result. Canvas dust shields were initially used on all the tanks to improve driver visibility but it was later realised that removing the front track guards helped with visibility. Fortunately the models I bought (from H&R) are early versions with the track guards in place, so are ideal for representing these Mk III's on the tabletop. There are quite a few excellent black and white pictures of these tanks on the Internet and plenty of other material on which to base the colour scheme. However there is a lot of variety between the colour schemes and markings described on various sites so I have gone with something that I think accurately reflects the historical vehicles and is in keeping with my existing tank forces. 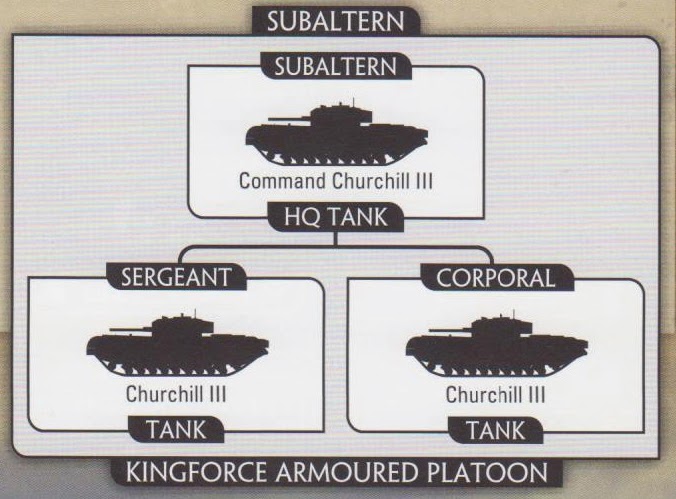 One thing I have added to some of the models is an RAF roundel which I have seen painted on the turret roof as an aircraft recognition symbol. I haven't found anything in writing that corroborates this but several modellers online have included it so I decided to as well. I have only put the roundels on two tanks though and these can represent the two platoon HQ Tanks. I've also painted a small white line on the side armour where the tank serial number would have been - at this scale it would be far too small to read but some sort of 'representation' of this marking seemed appropriate.

Kingforce can be selected as part of a Motorised Company from the FOW North Africa book for use in mid war games. I'm bending the rules (and history) a little to allow me to use two platoons of three Churchill's with my existing tank companies, but only for battles set during Oct/Nov 1942. Each platoon costs 410 points so they are not cheep, but they are tough vehicles and add a little variety to my existing companies.

I've been trying out a new technique for basing these models. Previous tanks were glued direct to the mdf base and when the sand was added this made tanks and trucks look like they were axel deep in the dirt. I have mounted these vehicles on small sections of 'coffee stirer' sticks glued in the centre of the base. This raises the model up by about 1mm and when the sand is added around the vehicle it puts the tank at just the right height to look like it's on rather than in the sand.
Posted by BigLee at 09:33