And so it begins

With the recent completion of my Micro Armour test models and bases I decided it was time for me to commit to this 'new' scale and buy some models. As already stated I want to collect forces for a Western Desert campaign using 6mm models with the Flames of War rules. To that end I have been looking through the various North Africa themed Intelligence Handbooks and have decided to shift my focus from 1941 to mid 1942 because I feel that was a more dynamic period and gives the widest range of vehicles for me to choose from. 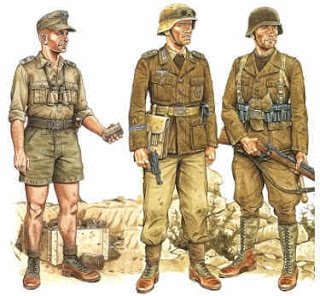 My intention is to build several medium sized companies for the Afrika Korp and the British Commonwealth forces facing them. I placed my first order yesterday so hopefully I can get started painting these by the weekend. I ordered enough vehicles and infantry to make a whole Tank Company for the Afrika Korp (I'll get the British models later) and all for just £30 including postage!


The equivalent force in 15mm from battlefront would probably have cost me close to £200, maybe £150 if I shopped around or bought alternatives from the likes of Plastic Soldier Company or Forged in Battle. This little lot won't take me long to paint either and then I'll buy the British. I could get used to this!

I'm still working on a few other things as well, including a large batch of desert bases ready for these vehicles. I'm also working on my long suffering 15mm Panzergrenadiers and I may get little more of these painted while I wait for the Afrika Korps to arrive. Plus I think the Delvers have a game this Friday and I may be called upon to run my HEX game, so I guess I need to prepare for that. Busy busy busy!
Posted by BigLee at 09:57