There was a very loud thump on the hall carpet last Friday that confused the wife. She called me and said "What have you been buying now?" in that oh-so-patient way wives have of gently reprimanding squandering husbands. I was non-plussed, "I haven't bought anything" was my reply. So what was this hefty package that had been posted through my door? When I got home I ripped open the large white envelope and discovered a double sized copy of Wargames Illustrated inside. I'd known that WI was approaching its 300th issue but hadn't realised us lucky readers were going to be treated to a 300 page issue of the magazine. 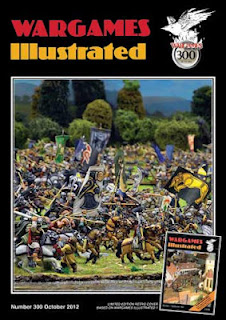 Apparently the WI team have been working towards this issue for some time and inside there are a lot of great articles covering a very wide range of games, periods and rules systems. As a subscriber my copy had a 'retro' cover in the style of the first ever issue of the magazine from way back in 1987. Back then I was a still a spotty teenager studying for my A-Levels (well maybe not studying because my future wife and I had just got engaged and revision was not on our minds!). I was playing Warhamer 40k Epic at the time and historical wargaming was a pleasure I had yet to discover.

A lot has happened in 25 years not least the fact that I've grown older and my taste in games had changed. WI has also undergone some major changes, including ownership with its controversial (in some quarters at least) takeover by battlefront. Personally I don't think its been a bad move for the magazine but there will always be some who cannot reconcile with the change and will always think of WI as FOW Illustrated. I think this special issue should forever banish this unfair label, but not everyone will agree.

So what is inside this mammoth issue? Understandably I haven't had a chance to read it all yet but I have scanned through its pages and seen a lot of articles I am looking forward to reading.

Open Fire! is the only Flames of War themed article in this issue and looks at the soon to be released boxed 'starter' set. It certainly looks impressive and includes two small starter armies (completely compatible with the rest of the range), a starter rulebook, card terrain and markers, indeed everything the beginner needs to get playing within minutes. It also comes with a very cool looking V1 and launcher ramp which I'm hoping they will release separately at some later date. This is also the first time I have been able to look at the new range of 15mm plastic infantry figures by Battlefront and they look very nice.

The Theme for this issue is Last Stands and there are several articles from a variety of periods for this theme. As this is the 300th issue of WI they could hardly ignore one of the most famous last stands of the ancient world featuring the 300 Spartans under King Leonidas at the Battle of Thermopylae. Crimson & Bronze discusses the myths that surround this battle and then goes on to present an in depth look at a spectacular set of figure conversions of the plastic range from Warlord Games.

Other Last Stands featured in WI300 include; The Last Stand of Spartacus tells the tale of the “gladiator-turned-general” Spartacus ans shows how this great warrior really met his end; The Battle of Karbala 680AD/61AH using the SAGA rules to create a scenario for the most famous ‘Last Stand’ in Islamic history; Alfreds Last Battle written by Prof. Ryan Lavelle introduces readers to Dark Age naval warfare; Also Custer Died revisits the iconic Battle of Little Bighorn; The Legion May Die, But Never Surrenders presents the tale behind the ‘Last Stand’ of 49 men of the French Foreign Legion in the Battle of Camerone, 1863; I Can't Understand It guides the reader through the massacre at Isandlwana in 1879; and Black Hawk Down looks at the action in Mogadishu, Somalia, in 1993 which was later made into a film by Ridley Scott.

There is lots lots more in this issue (I've only touched on a handful of the articles), including several excellent looking modelling workshops and of course some retrospective views back at the hobby over the last 25 years. Unless you are dedicated to a really niche wargaming period then I think nearly every wargamer will find something of interest in the pages of this issue. If nothing else Wargames Illustrated 300 lives up to its name with every page bursting with colour photographs of our wonderful and inspiring hobby.
Posted by BigLee at 06:00