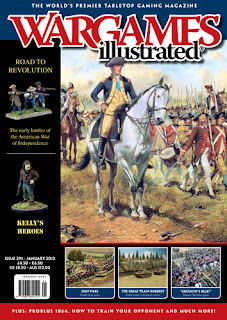 Last weekend I had a generally lazy and relaxed couple of days while outside the temperatures plummeted and the tempers rose. Somehow we managed to get pretty much everything - baring a last minute food shop - out of the way. The result was we actually had a weekend where we didn't have to go out shopping or visit anyone or do anything much other than relax and chill out. So when the letterbox flapped on Saturday morning and I found the December issue of Wargames Illustrated sitting on my doormat, I new exactly what I would be reading for the next couple of days.

This months theme is the Road to Revolution and looks at the early battles of the American War of Independence. There are four theme related articles in this issue plus an additional one focused on how to build a New England Farmhouse for your table. As always the building article is very interesting and there are plenty of ways this terrain piece could be adapted for earlier or later periods.

For me one of the best articles linked to the theme is Soldiers of '75 which showcases some of the miniatures ranges available and gives a set of simple painting guides and colour pallets for those looking to wargame the period.

However for me the best articles this month are not related to the theme. The first is a great article called Bank Heist! and presents a series of scenarios based around the classic WWII film Kelly's Heroes. The film and the game are centred on a rouge bunch of Allied veterans set on robbing a bank full of Nazi gold. The scenario is designed to use the rule-set Nuts! from Two Hour Wargames but I reckon it could be adapted to any WWII 28mm skirmish rules.

Another great article is Training your future opponent by Paul O'Grady. The article talks about how he has tutored his son in the fine art of wargaming. I suspect that a good proportion of the readers of BLMA fall into the same age bracket as me and have children (or as I refer them, Padawan learners) of their own. Both my girls are trainee gamers and owned their own set of polyhedral dice from a young age so this article struck a cord with me.

All in all not a bad issue with plenty to keep a broad range of gamers happy.
Posted by BigLee at 07:05