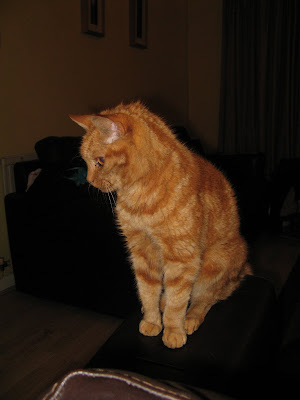 The Dagenham Dungeon Delvers met last Friday for our ongoing DnD 4e Campaign. Usually I host games (centrally located etc) but on this occasion myself and other members of the group travelled to the home of the Evil GM for the game. The Evil GM's son has been joining us for a brief period at the start of each game (before his bedtime) as has the family cat, Fish.

Fish is an old puss now but his curiosity clearly has not abated. Whenever the Delvers gather at the Evil GM's he usually puts in an appearance, if only to meow loudly until someone gives him a stroke. This game however he sat on the end of the sofa watching the action and occasionally meowing advice at us. He's become something of a fixture in our recent games so I think its high time we made him an honorary member of the Delvers.

The game itself adopted the usual pattern of of our group blundering around until we stumble into an uneven combat and nearly get ourselves killed. I'm not sure if  this counts as a strategy but it seems to work for us!