Its been a busy weekend one way or another, but with little to show for it on the painting front. We had a big family bonfire party on Saturday which required a lot of preparation and an equal amount of work on Sunday clearing up. By the time we had finished I was just too tired to contemplate painting so I watched some Star Trek on TV and read my book instead. 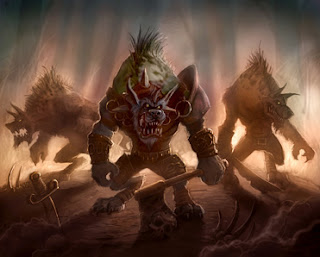 The weekend wasn't an entire write-off though as on Friday evening the Dagenham Dungeon Delvers gathered for the second game in a row (not sure how we managed that!) to fight our way northwards through the Forest of Valric. Our D&D 4E campaign is progressing slowly but we are nearing our goal.

Fridays game was interesting in that it consisted almost entirely of a Skill Challenge with combat encounters and Healing Surge reductions as penalties for failed skill tests. The combat encounters featured us clumsily blundering into Gnoll Patrols, although thankfully these were not as large as the group we encountered and battled in the last game. We've not had many skill challenges in this campaign - most of us struggle a little with the concept - but the Evil GM is clearly becoming more adept as this was a good game and an enjoyable encounter to play through.

I keep the group Campaign Journal and record the XP gained, creatures battled, treasure won etc.. According to my notes we are now just 900 points away from reaching 9th level. And its only taken us two years!!
Posted by BigLee at 12:12