I've managed to get quite a lot of painting done this weekend - well, a lot by my standards anyway. Despite a generally busy weekend somehow I found a few hours of relative peace in which to concentrate on the project in hand. So the US Motorized Rifle Platoon is nearing completion at last. There is still a lot to be done though so I expect these to still be on my desk in a weeks time. 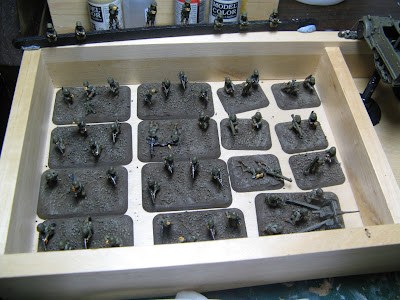 One thing I settled on was Base colour as a recognition feature. By this I mean the chamfered edge of the base that does not get covered in gravel or static grass. I wanted a way to make my German and US forces stand out as separate armies, beyond the obvious differences of Uniform Kit.

So I have opted to 'edge' the bases of the US forces in Brown Violet (Vallejo 887) and the German forces in German Fieldgrey (Vallejo 830). In other words I have used a colour closely linked with that particular force. In reality the difference in edging is hard to notice until you put two stands next to each other, but that was the point after all. It's just another way of clearly differentiating between stands of opposing forces in a melee.
Posted by BigLee at 09:01