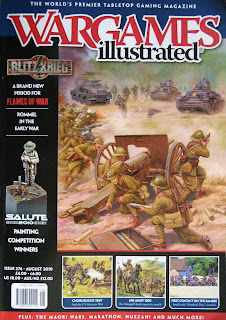 The August issue of Wargames Illustrated has just landed on my doorstep and it's time for Blitzkrieg! This issues theme is the release of the source book for Early War games using the Flames of War rules. I've been collecting forces for playing the Normandy campaign but looking at what has just been released I'm tempted (very tempted) to collect a force for 1939. Mind you, it has to be said, that I was also similarly tempted by the North Africa material but I've had to pick a period/theatre of war and stick to it.

Having taken a quick look through the 124 pages of this months WI here are a few of the articles that stood out:


It's no secret that I enjoy the mix of articles and eye-candy illustrations in WI but for me this is one of the best issues in a long time.
Posted by BigLee at 09:01