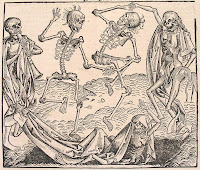 This post continues the series looking at Cataclysms and how they can be used in a roleplaying campaign. The idea of a global plague has been used often in Hollywood and in print and continues to be a powerful and plausible threat that grips the modern consciousness.

Bubonic plague is probably the most widely known plague of ancient times. It reared it head several times before becoming known as the Black Death when it swept across Europe, starting in Italy in 1348. However other plagues also ravaged the ancient world with equally disastrous effects. Ebola, Cholera, Typhus, Typhoid, Smallpox and Malaria all took their toll on ancient populations. Malaria was so prevalent in Ancient Rome that some historians have even linked its rise to the weakening and eventual fall of the Empire. 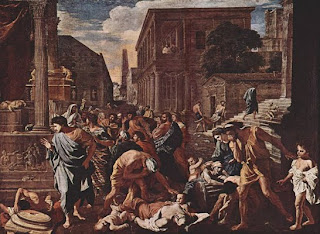 One of the best known of these ancient plagues occurred in 430-26 BC during the Peloponnesian War. It became known as the Athenian plague and counted amongst its victims Pericles, statesman, orator and General of Athens. Status and fame were no protection however and the plague swept away this hero of Athens as easily as it did its lowliest citizen. The Athenian plague may have been an early example of Bubonic Plague but it’s also likely it could have been Ebola or even hemorrhagic fever.
Another plague that was probably Bubonic in origin was the Antonine Plague which occurred during the reign of Marcus Aurelius (161-180 AD). As with earlier examples the plague was no respecter of social boundaries, and before it subsided had claimed the famed Emperor and Stoic philosopher as a victim.
Transmission
Wherever you find civilisation in the ancient world you also find disease. Since the first cities evolved in Ancient Mesopotamia around 4000-3500 BC disease has been able to take hold and spread easily. This was always true but never more so than in wartime when the overcrowded and besieged cities meant that plague could spread quickly. This is exactly what happened during the Athenian Plague.

The Antonine plague however was not caused by war, but by the end of war. As with the Spanish Flu epidemic of the early 20th century it was soldiers returning home that quickly dispersed the disease and ensured widespread outbreaks across the empire. 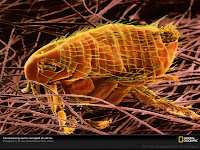 It has long been recognised that as well as Military Movement, trade has also been an important carrier and transmitter of disease from one area to another. The Justinianic plague (another possible Bubonic outbreak) in the mid-sixth century rapidly travelled along the caravan trading routes. It spread throughout the empire and modern historians have been able to trace its progress along trade and military routes, always moving from the coastal cities to the interior provinces.
This was also the case with the Black Death in the 14th century. Coastal cities were particularly affected but soon plague spread inland. This was facilitated by the main carrier of the disease, rats and the fleas that make them their home. Rats in particular found overcrowded and unsanitary urban areas particularly conducive to their lifestyle. However it should also be noted that any animal which has fleas – such as dogs and cats – could also be a carrier.
Symptoms
The Symptoms of plague will of course vary from disease to disease. The initial symptoms of Bubonic Plague for instance include headaches, a rash which covered the body, and fever. This would be swiftly followed by coughed up blood, and extremely painful stomach cramps, followed by vomiting. These latter symptoms are most likely the result of internal bleeding and swallowing blood which the stomach cannot digest properly. Many victims of the disease also experienced insomnia, restlessness and unquenchable thirsts.

Other commonly experienced symptoms – common to several infections – include hallucinations, fever and fatigue, facial inflammation, sore throats and often diarrhoea. This latter symptom massively dehydrates the victim and is the usual cause of death. With Bubonic plague the most obvious symptom will be the buboes which appear in the groin area or armpits. These fester and bust spreading the contagion to bedding and cloths and then on to new victims.
Malaria was widespread in the ancient world and was not only lethal to the young, old or sick but could also materially weaken a society. Symptoms include fever, weakness, lethargy, diarrhoea and vomiting. Those that the disease did not kill would often be too weak to harvest crops or tend animals and famine often followed swiftly.
Survival
The Antonine plague killed as much as one-third of the population in a very short space of time. Diseases like malaria lasted longer but were equally deadly in the long run. Typhoid fever kills between 12 and 30% of victims while smallpox death rates vary enormously dependent on the severity of infection (anything from 10-50%).

The Bubonic Plague has incredible killing power and infected individuals generally died by the seventh or eighth day with death occurring in roughly 70% of cases. Pneumonic plague however has over a 90% mortality rate and although Septicaemia infected individuals might survive for two to three days the death rate was close to 100%. Some recent studies have suggested that between 45-50% of Europe’s population was killed over a four year period by the Black Death.
Effects on Society
With the onset of plague normal life came to an end, at least for a while. Some cities became practically deserted while others, especially those which were not trade centres, were less affected. Doctors and other caregivers frequently caught the disease any most sufferers had to fend for themselves. Food, particularly bread, became scarce and some of the sick may actually have died of starvation, rather than disease. 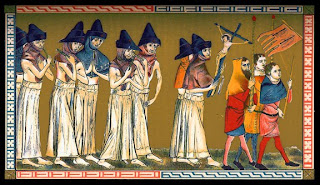 Descriptions of the Athenian plague describe how the despair caused within the city led the people to be “indifferent to the laws of men and gods, and many cast themselves into self-indulgence”. Christian writers felt the sufferings caused by the plague were the punishment of God. But as has already been noted, the plague killed saint and sinner with equal zeal. In such a religiously charged environment mass hysteria, flagellant processions, or persecutions of other religious groups often took place.
In the years following an outbreak of plague shortage of manpower was a chronic issue for the authorities. Crops ripened with no one to harvest them and fields were left unploughed. Inflation soared as the taxation and employment base shrank dramatically and civic construction stalled, sometimes for generations. Recruits for the army become increasingly more difficult to find which created great opportunities for foreign mercenaries which brought with them new waves of disease.
The churches and monasteries were badly hit by the plague but recovered quicker as much of their funding came from private donors. These rich patrons would likely be suffering from the economic effects of plague but would also be acutely aware of their own mortality in the wake of diseases that crossed social boundaries as easily as they crossed seas and rivers.
Plague in a Fantasy Setting
History teaches us that plague can wreak havoc in society and often takes generations to recover from. It can materially weaken empires and change the political and social structure of a civilisation. Plague kills rich and poor, old and young alike and few if any are exempt from its consequences. Even those lucky enough to survive the epidemic unscathed will suffer deprivation, hunger, higher taxes and an infrastructure that enters a period of decline that may last decades.

History also shows that religious upheaval will almost certainly follow such a severe shakeup of the social structure of a society. In a world where magic and clerical healing are common, religion may very do very well from such a disaster. The society that develops from the remnants left behind may well be more radical and more pragmatic. In many ways this is the ideal backdrop for a campaign world as the normal constraints of class and status are broken down and social mobility becomes the order of the day.

Plague in a fantasy setting, just as in Hollywood, can be much more devastating than real world examples. Severe as the Black death was, its overall mortality rate was 'only' 30-50%, leaving enough survivors for society to recover slowly. Fictional plagues could be more virulent, be global in reach and result in much higher death rates literally dumping the survivors back in a new stone age. Such an event would easily be defined as a cataclysm.

Even less severe plagues could conceivably result in the fall and rise of civilisations, either because high mortality breaks down regular institutions and the rule of government, or because lesser powers take advantage of militarily weakened neighbours. Cities may become abandoned, fertile farmland can become a desert and trade routes fade into obscurity. All of which provides opportunities for adventurers and bandits alike.
Posted by BigLee at 09:01

Email ThisBlogThis!Share to TwitterShare to FacebookShare to Pinterest
Labels: Worldbuilding