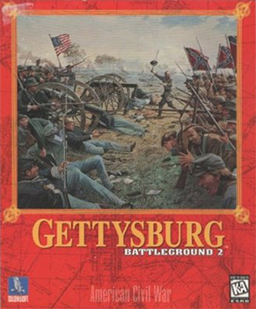 I've been sorting out a load of old computer stuff that has been accumulating in the house. Over the years I've acquired, but never got round to throwing out, several computers, keyboards, screens and a huge pile of very old computer games that have long since become defunct. Most of this stuff doesn't work any more but all of it comes with fond memories.

Foremost amongst the pile of old games are a collection of Talensoft Battleground wargames. I bought these when I still had a computer that ran Windows 95 and haven't played them in years. I tried reloading one of the games on my laptop with its Vista OS and needless to say it didn't respond well. While this is a great pity its also an opportunity for me to get out and buy a more up to date version of the game.

Battleground Gettysburg (originally released in 1995) was my first purchase in the series and was one of my favorite games for a long time. I had a trial copy that I think came on a magazine CD and liked it so much I went out and bought the full version - the only time I've ever done this. 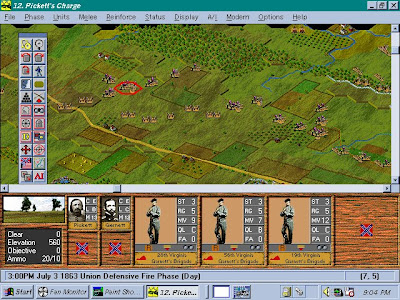 One scenario I played time and time again was Picketts Charge. I got slaughtered pretty much every time I played the Confederates but being a computer game I could go back to the beginning and try again, changing my strategy based on earlier games. I'd like to play this with miniatures one day, just to see if I learned anything from my virtual training ground.