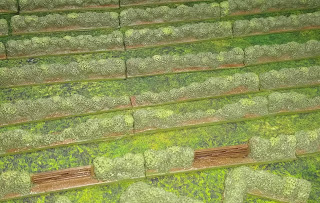 Following on from my last Chain of Command game, the Battle for Le Renau Farm, I decided I needed more terrain options. In particular, I want terrain that would offer some cover but also be easily crossable. I have already painted up a lot of stone field walls and now I decided I needed some small hedges. So I turned to the internet for inspiration and I am really happy with what I found on the Pendraken Website. They make several sets of resin hedges that were ideal for my needs and at just £2.50 per foot wouldn't break the bank in terms of cost.
As with all resin, I started by washing and scrubbing the models in hot soapy water to remove any oily residues from the casting process or from handling, and then left them overnight to dry. Once dry they were sprayed with my usual Brown primer and then given a coat of Dark Green (a can of Tamiya that I picked up for a couple of pounds on eBay) as a basecoat. Several layers of highlighting followed and with the ground and the gates picked out that was it. As usual, I sealed the models with several coats of varnish to protect the paintwork, so hopefully, these should be featuring in my games for many years to come.
I bought enough straight sections for 6' of hedge with some additional gate sections and a couple of sets of curves and set of corners to make a total of about 10' of the hedge. Hopefully, that should be ample for my needs, but knowing me I'll end up buying more at some point in the future! 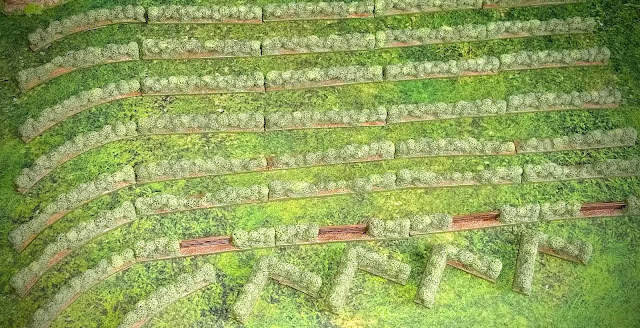 I'm now giving some thought to what other 'scatter terrain' I can work on to continue to enhance the look of my Normandy Games. I have some old prepainted sandbag emplacements that need a repaint so I may work on them next. Any other suggestions folks?
UPDATE: I've had a couple of requests for a size comparison against 15mm figures so here's a picture. Pendraken produce figures and terrain for 10mm so how do these hedges look against the 15mm figures I use for Chain of Command? Of the five US Infantry featured below, three are kneeling and two standing. Bear in mind that the figures are mounted on 2mm MDF bases.