Last week I posted pictures of some small hedges that I bought from Pendraken and wondered if there were any other scatter terrain items I could produce. Then I remembered that I had some old prepainted terrain that I had bought for my Western Desert games of Flames of War (many moons ago). These had seen better days and needed a repaint anyway, so I decided to start afresh and paint them for my NW Europe/Normandy games. 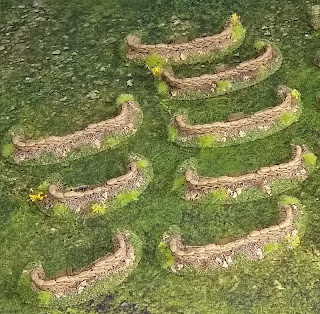 These are actually Dug-in Markers for Flames of War and originally came prepainted for European games. However, when I bought them I converted them for use in the desert with some selected dry brushing to turn the earthen banks into 'sandy' banks topped by sandbags. As I mentioned, they had seen better days, having been stored poorly and bashed around a bit so they were due for a repaint anyway. So I cleaned the models and gave them a new basecoat of Brown primer.

The paint job was very simple after that, with several layers of dry brushing on the earthen banks and the sandbags, followed by some careful inking of the sandbags to increase the contrast. Once they had dried I gave all the models my prefered practice of using multiple layers of varnish (two Gloss followed by one or two Mat/dull cote) to give them a tough protective layer. I didn't do that with the originals because they were pre-paints and the resulting chips and scrapes were why I needed to repaint them. When everything was thoroughly dry I added turf and grass tufts so they will blend into my other terrain for this setting.

Hopefully, these will see action soon and I think they will be very versatile.