Rebasing WW2 US Infantry for CoC 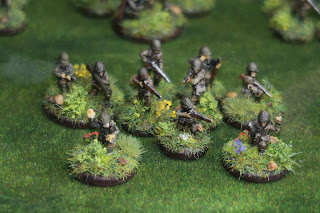 Many of us employ the phrase "a wargames butterfly" when describing our gaming interests. I'm realising that also applies to me, now more than ever, as I have recently purchased Chain of Command by the Too Fat Lardies. This isn't the first TfL games I have used - the other being What a Tanker - and indeed the first in some ways influenced the choice of the second. I have an abiding interest in the Normandy campaign and I have a lot of 15mm terrain for this Theatre, so it made sense to utilise it for two rulesets rather than just one. I am also a growing fan of the Lardies rules so when choosing a suitable infantry ruleset for the period I started by giving serious consideration (and eventually picking) of Chain of Command.

Now I have a bit of a head start in the project aided by the fact that I used to play Flames of War for the same period and theatre of war. I sort of fell out of love with that ruleset, and I sold much of my figure collection (something I regret bitterly) but I still had some figures in storage. I dug them out recently and was inspired to re-use the models for a different game. The result has been a week of intense rebasing from teams to individual basing suitable for CoC. I've completed my US troops and later this week I will be starting on some Panzergrenadiers. Hopefully, I will be able to start playtesting the rules to learn them within just a few weeks of buying the rulebook.


Next on the table for rebasing are some Panzergrenadiers. Once I have these done I can start some playtesting to help me learn the rules. I'm hoping that by the time the German figures are rebased I will have received delivery of some new figures from Peter Pig (some support options for the US troops) but more on that in a later post.