Spelunking and other pursuits

The last couple of weeks have been exceptionally busy for me. I'm still working pretty much full time, only part of which is working from home, so it's been... let's call it 'challenging'! And I've also been very busy on the hobby front. I have been quietly getting on with some figure painting for frostgrave and working on a couple of small terrain projects for my 15mm Normandy setting. One of these is nearly finished and I'll be posting some pictures soon and I'm putting together a tutorial video on my YouTube page for the end of the week, but more on that later. 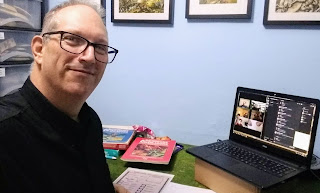 The Internet has been coming to its own for my hobby at the moment because I've been using it to stay in touch with the Rejects via Zoom enabled 'paint and chat sessions' on a Monday evening. These have been highly enjoyable because when we're playing a normal game we very often don't get a chance to just chat about how things are going. Most post-game conversations tend to drift in the direction of politics and that can get a little heated because we are pretty a diverse group! The P&C sessions mean we have had a chance to catch up with a few of the rejects alumni in the form of Fran, Ian and John so it's been good to see them and catch up, especially in these difficult times when social connections are more important than ever. I hope these painting chat sessions become a regular feature well after social distancing comes to an end because for me they have been a bright point in what has otherwise been a dark period.

The wonderful and terrible Interweb has also facilitated getting back into some role-playing games for the first time in years. A few months ago my daughter and her partner asked me to join them in a 5th edition Dungeons and Dragons game based on the stranger things TV series. The Young Padawan and I joined Sarah and Perry in this short campaign and we had a great time. So good in fact we decided we would play a regular ongoing game of D&D in the Ravenloft campaign setting. We had a couple of sessions before the shutdown began and have been exploring ways to continue playing despite social isolation. Later today we plan to try the Roll20 site for the first time and It'll be interesting to see how this works. 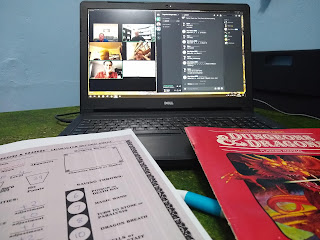 I've also been playing Dungeons and Dragons with my old gaming group, some of whose members I went to school with! We decided to play the old red box classic D&D and have been using Discord as a way of keeping in touch rolling dice and seeing each other. It's been a mixed success but that has nothing to do with the game and more to do with technology and bandwidth. My ageing laptop struggled a little bit in the session on Friday and in the end, I opted to play the game via my phone and tablet because they just worked so much better. Everyone is 'winging it' where technology is concerned at the moment, and gamers are no exception.

It's been really good to play with these guys again because the last time we had any sort of regular gaming session was probably 6 or 7 years ago as it became increasingly difficult to get together as members of the group moved away and got jobs in other parts of the country or indeed overseas. One of the group joined the session on Friday from Los Angeles while others dialled in from various locations around London and the Dungeon Master was based in Lincoln. When my technology held up it was very good we were all able to see each other on video and on the other half of the screen we had a text chat session going where we could roll dice and write silly messages to each other (none of us has grown up!). Again this is a session I hope we continue into the future because it's been great fun to see the guys again and overcome the issues we've had in the past with gathering together.

In addition to all this gaming, and as I've mentioned here a couple of times, I've been doing some videos for YouTube. It's been a thoroughly enjoyable experience and I think I'm going to come out of this quarantine situation with a whole new skill-set as a result. Step-by-step I've been learning about presentation skills; talking to camera; scriptwriting and editing; and of course filming. I'm hoping each video is slightly better than the last one and so by the time we get to September I might finally have a product I'm happy with! I really enjoyed doing these videos, although it is very time-consuming. I'm currently working on a tutorial video that probably won't last more than 5 or 6 minutes but has taken up the best part of a day and a half just for the filming and I haven't even got to the editing part yet. 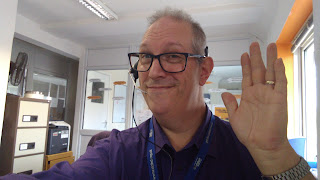 In order to fit in all this stuff, I'm trying to be a little bit more disciplined with my time. As already mentioned I'm still working and that's been taking up a lot of time. Most of my colleagues are furloughed at the moment and until this week I was the only one taking calls. I work for a small charity offering benefits advice to local residents, so you can imagine I have been exceptionally busy with the current set of circumstances that most people find themselves in at the moment. It's rewarding work, but it has been very distressing at times. Combined with the ever-present existential threat of Covid-19 to my family (particularly my Daughter and Brother-in-law who are nurses on the front line), I really need my hobby to get my mind off of negative things.

So in order to fit in as much as possible, I have been scheduling my free time in much the same way as I would schedule my work time. This means that as far as possible I'm going to try to stick to a fixed timetable for publishing both on the blog and for videos on YouTube. I need to allow time for the planning and execution of what I'm working on and I can't make it up as I go along. What I don't want is for the writing of the blog or the production of videos to become a chore or something that interferes with gaming time or paint and chat sessions and all the other things I've been enjoying recently. My aim is to continue posting once or twice a week on the blog depending on whether I have something to talk about, and the YouTube videos will start to be published on a fixed weekly schedule. This means I can do most of the filming I need over the weekend and the editing and new scriptwriting on a Tuesday and Wednesday. I hope to improve the quality of the videos I do, and I don't want to be in a position where I'm rushing to publish something, so planning is key. 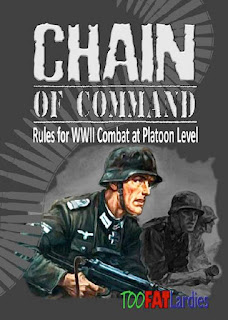 I'm still working on a few other projects... like I haven't got enough to do! I have been working on my Zulu wars rules but I've also been given some serious thought about skirmish gaming for world War II. I'm really enjoying What a Tanker, but for a while now I have wanted some rules to include infantry. I've been doing a little bit of reading about what's available right now - and I'm sure most gamers will have their own preferred set of rules and could make their own recommendations  - however, I really like Too fat Lardies stuff and so I've bought a copy of Chain of Command. I think it's a cracking set of rules and I've really enjoyed reading it. I still have some 15mm second world war infantry figures from when I played Flames of War and I don't think it would take much effort to re-base them singly for use with CoC. I'm not in any rush however and I need to give some thought to this before adding it to my ever-growing to-do list!

So as you can see I'm being an exceptionally busy boy. I'm spelunking again after many years away from role-playing. I'm exploring technology to stay in touch with all my friends. I'm playing new games and adding to old collections. And despite the lack of any trade shows my hobby expenditure seems to be as much as ever. But that's a discussion for another day.
Posted by BigLee at 12:45