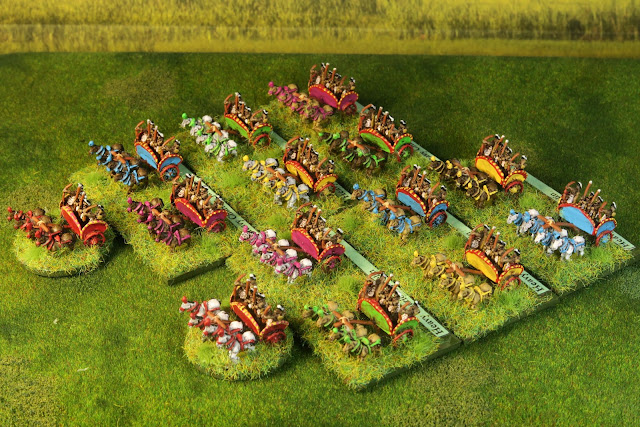 There is evidence that Chariots had been in use in India for centuries before the arrival of Alexanders Greeks. Epic stories tell of the great hero's going into battle in chariots and for a long period, it was the elite arm of Indian armies. However, by the fourth century BC, they were being superseded by the Elephant and by the time of the Battle of the Hydaspes leaders such as King Poros went into battle astride these massive beasts of war. The Chariot was still an important and prestigious arm of the military but its heyday was over.

Much of the visual information I have gathered suggests that Indian War Chariots were highly painted vehicles, many with umbrellas or canopies over the occupants (probably removed during battle). Chariots came in a wide variety of sizes, from single man vehicles through to massive constructions supposedly capable of carrying six occupants. I have chosen the four-man variety and all are painted in bright colours. Constructed to be light but strong they were mostly leather over a timber framework. They are recorded as being highly decorated with bells, animal skins and flags. The wheels were usually fairly small with up to sixteen spokes and had a metal (probably iron) tyre. The chariots, even the larger ones, had a single pole and usually, only the inner pair of horses were yoked. The outer horses were connected by side traces but these would have been needed to carry six crew and all their fighting equipment. One description of Poros' chariots says they had six crew but this may be a miscounting, including escorting infantry with a typical crew of four. These models have two crew armed with bows while the 'drivers' have Javelins. 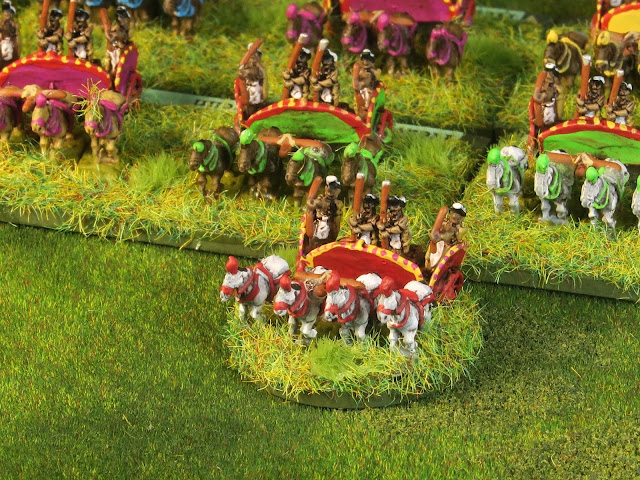 I have been looking forward to painting these for a while but decided early on that I would treat these and the Elephants that are coming next as my reward for getting through the 'drudgery' on the infantry and cavalry. I use that word advisedly because once I get past the initial inertia at the start of a project, I enjoy painting all of it, including the less glamorous units! These chariots, however, could never be described as unglamorous. 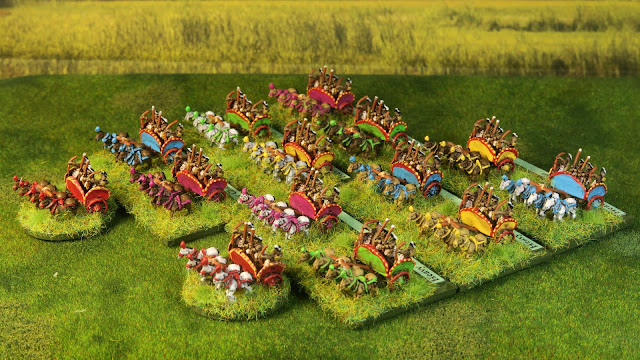 There are six units here which include 12 Chariots, 48 crew and 48 horses which should earn me 60 points. I've also done a couple of command chariots, based individually which should net a further ten points. With the Chariots complete its now time for me to focus on the Elephants and I expect these to be just as spectacular and an even greater riot of colour.
Posted by BigLee at 08:00