The Battle of Beaumont Castle - War of the Roses 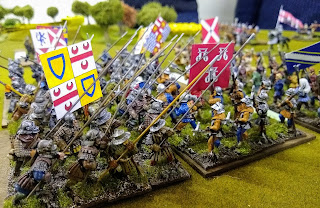 Saturday saw the Rejects gathering with the return of another one of our long lost members in what will probably be my last game of the year. John moved up north a couple of years ago and was down this weekend to see friends, so we planned this game several weeks ago. Stuart put on a War of the Roses game and this time it was a biggie. The stakes were high for me because my track record this year has been appalling and I desperately needed a win to lift my flagging spirits.

The Setup
The Yorkist army moves to besiege Beaumont Castle but Lancastrian reinforcements arrive before they get into position. With the castle troops sallying out the Lancastrians are poised to deny the Yorkists the high ground they need to bombard the castle.

When Ray, Surjit and I saw our deployment we were initially worried that we would have a tough fight on our hands. We were told that if we had sole control of the hill in the centre it would increase our breakpoint by one, however, we fully expected the Lancastrians to have a similar order. In the end, we decided to let the enemy advance onto the hill where we could concentrate our archery fire from two sides. Only when they were sufficiently weakened would we close into hand to hand combat. The flanking battles (under Warrick and Falconberg) were to hold the enemy in check while we ground them down in the centre. Things didn't work out exactly as planned though...

Analysis
Well, I can unashamedly say I bloody enjoyed that game. For a change, my dice rolling wasn't awful and as a team, we had a good plan that worked perfectly.  Our opponents fought well but in the end, just couldn't monopolise on what looked like good deployment at the start. It's a  pity poor old John came all the way down south for a defeat, but thems the breaks I guess.
Posted by BigLee at 13:01