No sooner have I sorted my Operations Room out than I start making a mess in it. And what a wonderful mess! For the first time ever I have space to work on multiple large projects at the same time. Up until now, I have had to co-opt the dining room table, and then only for limited periods at a time. Now I can spread out, make a mess...and leave it there as long as necessary. So what's on my table? Well, currently lots of high-density foam. I've spent the last couple of weeks busily cleaning and priming miniatures ready for the start of the Challenge in a few days time, but now I'm beavering away on lots of foam terrain. 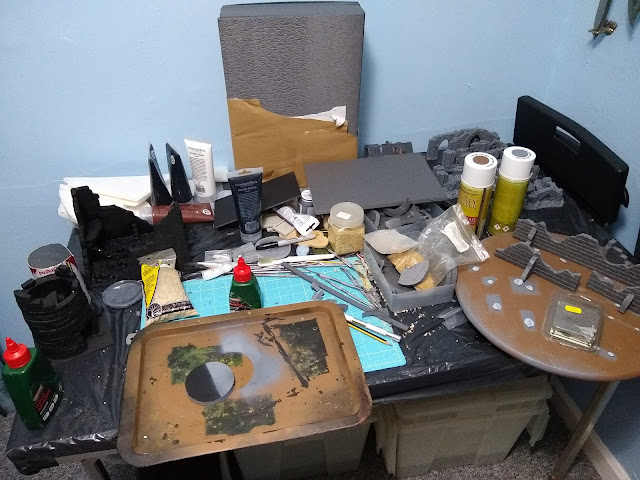 I've never worked with this material before so I'm learning 'on the job' so-to-speak. Much of the terrain you see here is pre-cast resin stuff that I picked up at Warfare a few weeks ago but the first bits of homemade wall can be seen, along with a Tower. This latter piece was very much a test item as it was the first thing I had a go at. I learned a lot about the properties of this material, and how to work it. Future buildings will hopefully be more elaborate and ambitious in scale. Expect to see a lot of this in the Challenge, as I need enough buildings to cover this table (when it isn't being used as a workbench). I probably should have started practicing with this material much earlier, but at least I'll have some of the resin stuff to paint early in the competition, and my home made stuff will follow later on.
Posted by BigLee at 13:55