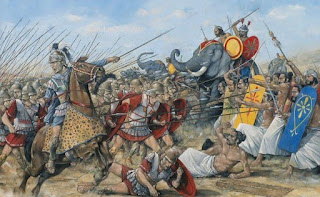 I'm fascinated by the story of Alexander the Great and have been since I was a kid. Over the years I have read plenty of books about this giant of history and have long been fascinated by the fact that these Greeks made it all the way to India in a time when the sub-continent was largely unknown outside of myth to most Europeans. I've been toying with the idea of building a Classical Indian Army for a long time but other projects have kept me busy. Now, at last, I'm ready to make it a reality. I'm not sure if I'll ever get to game with this army, but I'm looking forward to painting it none the less. The order of battle I have gone for broadly corresponds to that fielded by King Poros at the Battle of the Hydaspes and that means lots and lots of bowmen.

It's worth noting that most of the information I have gathered regarding this army has come from the WRG publication The Armies of the Macedonian and Punic Wars by Duncan Head. However, I have also tried to refer to original source materials such as the translated works of Arian wherever possible. The interweb has made this process much easier of course and I have been able to track down magazine articles and other sources as well. Few Indian sources survive and I have struggled to find the translated versions, although I will continue looking (and suggestions are welcome!). What we do know of Northern India in the 4th century BCE was that it was divided into many small tribal monarchies and that war between them was probably common.

Indian Infantry wore sandals and a simple high waisted kilt, usually made of white cotton. The longbow was probably as long as the later English Longbow but made of Bamboo; it's unclear how powerful they would have been in comparison. Arrian suggests they were very powerful but I have not been able to find more contemporary sources to corroborate this. The bow was strung with hemp or sinew and given the damp conditions prevalent in this region for much of the year its hard to say how effective these weapons would have been. The arrows were 4ft 6in long and made of cane or reed. The real strength of these units was probably not the weapon so much as the quantity of firepower that could be directed at an enemy that would normally be as lightly protected as those firing. 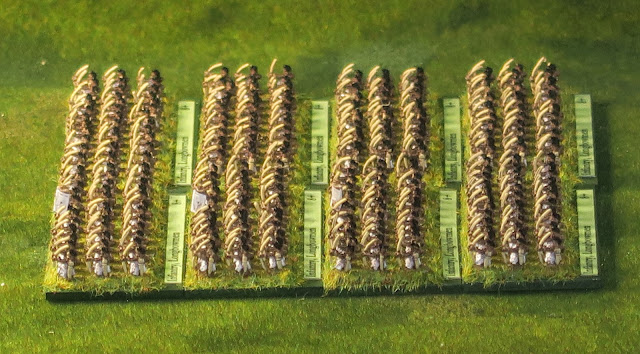 The core of the Army of King Poros at the Hydaspes was the Longbowmen and I have opted for eight units of these - a total of 288 infantry figures which should earn me 144 points in the Painting Challenge and get me firmly started towards my target figure.
Posted by BigLee at 12:12