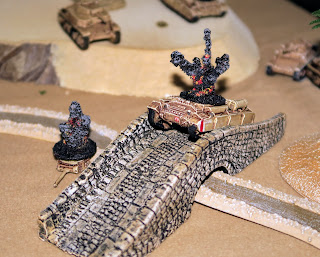 After the test game I did with the rejects (Skirmish at Siniyat) I have been giving some thought how to run a bigger game for more players later in the year. One idea that I have been considering is giving players several vehicles each from the start; maybe three tanks in a squadron/platoon per player. This would give players a chance to have a more tactical game and, hopefully, encourage more cooperative action rather than a simple 'shoot out'. At the very least it may stop tanks from picking hull down positions and then staying there for the rest of the game. Earlier this week I had a chance to try this out with someone completely new to the rules.

I've had a couple of days off work this week to spend with my daughter. It's her school's half term break - inexplicably out of sync with every other school on the borough (including my wife's) - so I took a few days off work to look after her. This meant I had her at my mercy and she was given a choice of a day out at a Museum of my choosing or a game with me at home. Outmanoeuvred and outgunned she selected my preferred option, the game at home. I took the opportunity to get her playing What a Tanker! with my collection of British and Italian tanks from Operation Compass. She wasn't all that keen to start with but as soon as she brewed up one of my tanks her enthusiasm increased... I should have known better than face my daughter in combat once her blood is up!

The Setup
I set up the table and gave her the choice at what end she started. There was a lot of terrain and intersecting wadi's so this was always going to be a difficult zone to move around. What I hoped was that the difficult terrain would make cooperative tactics between the vehicles in a platoon much more effective. The aim of each side was simply to destroy the opposition and control the battlefield.

Order of Battle
Given that she had never played the rules before I decided to give the Padawan the advantage of outnumbering my tanks four to my three. She started the game with Two M13/40's medium tanks and two fast L6/40's verses my three Valentine II tanks. My armour was better but the M13's had better guns so this was an interesting challenge. 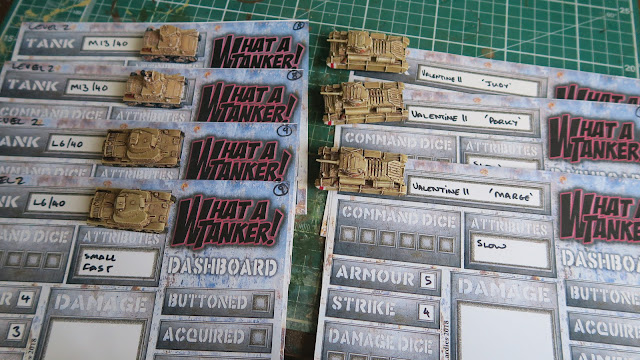 Analysis
Note to self: "Stop playing games with the Padawan, she keeps beating me!"

To be fair the young one did very well, handling her tanks as a cohesive unit and concentrating fire on my most exposed tanks. She got to grips with the rules very quickly and I soon learned to regret giving her superiority of numbers as she was clearly never at a disadvantage. On the plus side she seemed to be enjoying herself (despite turning into a grumpy teenager over the last year) and it was good to spend a few hours rolling dice against each other once again.
Posted by BigLee at 17:30