Battle of the Poppy Field 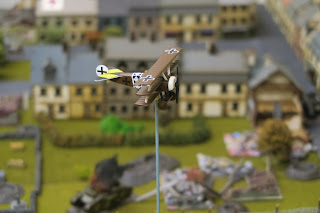 On Sunday I joined the Rejects for a very special commemorative game. Stuart called me about this a couple of weeks ago and I immediately said I was available. Most  of the guys were able to make it for this game and Postie asked me to make the arrangements for us to participate in the silent reflection scheduled for 11am. A full write up of the game with pictures is below but as this was a commemorative game I would like to start with a couple of dedications.

Stuart in particular dedicated this game to the memory of his Great Grandfather, Private James Till of the Royal West Kent Regiment. Private Till died at the young age of 30 somewhere on the Western Front in France in July 1917 and Stuart is very fortunate to have some family memento's that provide a very direct link to the war that ended exactly 100 years earlier.


These were an amazing and very touching reminder of a young man who gave everything fighting for his country. I think we were all very humbled to have seen and handled these, particularly on the 100th anniversary of the Armistice. We spent a considerable time talking about the ceremonies taking place across the country that day and sharing stories of our own families from that time. 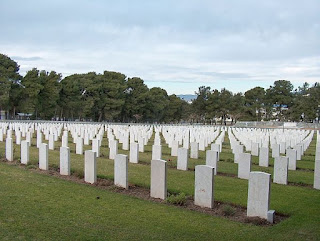 I'd also like to add a dedication to my Great Grandfather, Private George Henry Woodward, Royal Army Service Corp. He died 10th October 1917 at the Kalamaria Supply Depot in Greece. Georges death certificate revealed that he was not killed in action, nor did he die of wounds. Instead he fell ill with Dysentery which eventually killed him. For me this is all the more tragic and I know that his loss still effected my Nan many years later when she asked me to look up any information about him. She knew he died in Greece but the details of his death and the site of his burial were unknown. Thanks to the Commonwealth War Graves Commission website we now know that George is buried in the Mikra British Cemetery south of Thessaloniki, in the municipality of Kalamaria, Greece. Not far from where he was stationed.

Now it was time to begin our commemorative game.

The Setup
Stuart set our game right towards the end of the war when the fighting and the killing were still happening, despite the knowledge that the end was clearly in sight. Fighting continued right up to the 11am ceasefire and these are even tales of last minute assaults by over eager commanders determined for a last dash of glory before everything came to an end.

Ray and I were to play the British side with Mark and Surjit on the German side. As expected this meant they were defending a hastily built trench line while we were attacking with mass tanks supported by an inadequate number of infantry. Both sides were given maps of the battlefield indicating objectives and the game started with a heavy smokescreen having been laid down by the British to cover the advance of the tanks. This meant they started the game in an advanced position (anywhere from 18 to 36 inches in the table) determined by dice roll for each vehicle. Thereafter they would crawl towards the enemy lines at an agonising 4" per turn for the Mk IV's and 6" for the Whippets... if they didn't break down or were destroyed by enemy guns.

The initial moves were performed with screens down to hide the other sides dispositions. This represented the smokescreen and meant that both sides had to rely on the maps provided by Postie. 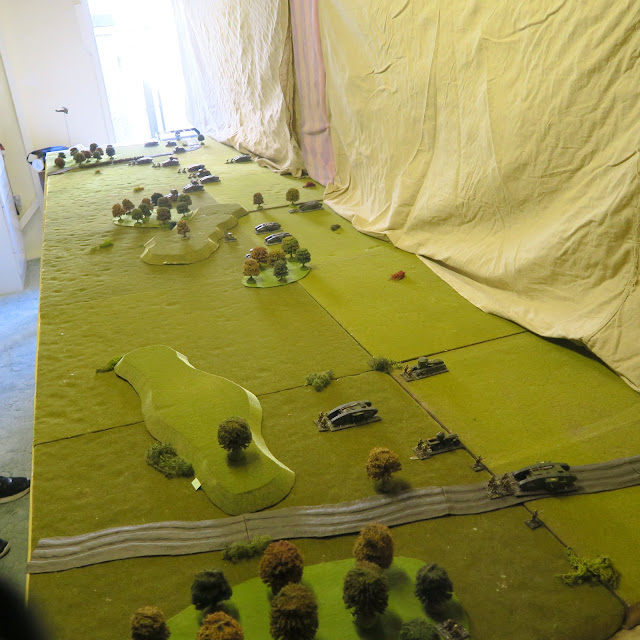 We had completed this initial stage and raised the screens just before 11 am and were now ready to start the game.

Remembrance
At 11 am precisely a Bugle began playing the Last Post* and we all stopped what we were doing and prepared to pay our respects. After the Last Post, Stuart read out the Exhortation:

"They shall grow not old, as we that are left grow old:
Age shall not weary them, nor the years condemn.
At the going down of the sun and in the morning
We will remember them"

We then remained head bowed for the traditional Two Minutes Silence, ended by the playing of the Reverie and Stuart reading

We may have been just a bunch of silly, aging wargamers standing in a shed but I can honestly say it was one of the most moving remembrance ceremonies I have every taken part in. I had a lump in my throat and the hairs stood up on the back of my neck as the last post began, and the two minute silence was reverently and solemnly observed by everyone present.

(*The British Legion have a 4 minute MP3 download specifically for use at remembrance ceremonies. It times the Last Post, Exhortation, Silence and Reverie perfectly and I used it as an alarm on my phone so we were able to take part in the national commemorations precisely in line with the rest of the country).

The Game
With the remembrance ceremony concluded we were now ready to start our game. As already indicated the British side (Myself and Ray) started almost half way across the table having advanced under cover of smoke. As the smoke cleared however we were dismayed to find that the maps we had been given before the game were less then accurate.


Conclusion
The British achieved three of their four objectives which was a solid British win. However with the massive loss of tanks and infantry it felt like a hollow victory, particularly as this battle was set less than two weeks from the end of the war. Sadly fighting in WWI continued right up to the eleventh hour. The Armistice documents had been signed shortly after 5am but the ceasefire was set for 11am to allow time for the news to reach front line units. This delay is estimated to have cost the lives of nearly 3,000 soldiers in the final hours of war. Some commanders saw the terms of the Armistice as soft on the Germans and still believed that they had to be severely defeated at a military level to effectively ‘teach them a lesson’. Consequently many attacks planned for the 11th went ahead, even when their commanders knew about the 11am ceasefire. One last act of madness in a war that few today can truly comprehend.
Posted by BigLee at 10:43