Planning for the Challenge

I've been feeling a little bit 'unfocused' for a while. Not quite between projects so much as struggling to bring several to a conclusion. I have a number quite usable armies for different periods that I want to expand and I have some vague ideas for future projects that I don't want to rush into. In short this particular wargames butterfly has become stuck in a web of his own making! Don't get me wrong, I'm not in a 'slump', I'm not struggling with time (any more than usual), I've just allowed myself to become distracted by multiple projects to the point where I have ground to a halt unable to make any clear decisions. So this week I have been giving some serious thought on how break the deadlock and I'm using the upcoming Analogue Hobbies Painting Challenge to drag myself out of this stalemate.

In previous years I have gone into the painting challenge with a very clear 'project' as my goal. One time it was painting 6mm armies for the 2nd Punic War; The year before last I focused on a  Pyrrhic army and last year I painted thousands of Zulu's for an Anglo Zulu War campaign. I'm glad I did these projects but it has to be said some were difficult to keep up with. In every case I completed my painting list but said to myself, I want to come back to this and expand at a later date. That date has finally come. Unlike previous years I'm not heading into the Winter Painting Challenge with a huge target list, rather I have a series of small additions to each of the previous projects that I wan't to work on. In short I'm finally getting around to the fun stuff after the hard slog of building the core of several armies. 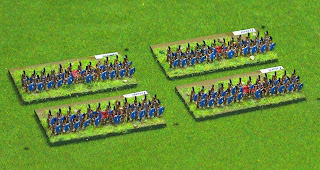 The biggest additions are a long overdue expansion of my 6mm Polybian Romans. I've ordered enough figures to double my existing Hastati, Principes and Triarii as well as some more Generals and Hero figures. I'm also considering expanding some of the Allied units that go with this army but for now I have left them off my order. The biggest challenge I think I am going to have with these will be getting them to look like the units I already have painted. Thankfully I keep detailed notes when painting new figures so I should be able to keep the painting consistent with those I did three years ago. I'll also need to pay special attention the the basing so they match what I already have. 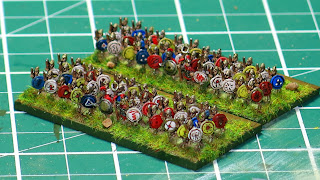 For my Carthaginian army I have ordered some more African war elephants. The plan is to re-base my existing pachyderms on bases of three per base rather than the two per base I have now. I'm not doing this for any game purposes, this is purely an aesthetic issue for me. I just think the completed elephant units will look more intimidating than they do now, especially when they are moving towards your troops!

I have also bought more Celts to add to Hannibal's army. These are large deep units with a lot of figures per base and particularly scary when deployed. They will make a very useful (and very colourful) addition to the Carthaginian forces that I already have. 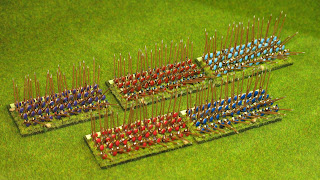 I'm not planning on a massive change to this army at the moment. I have some more Generals and Hero models to complete, and I think I have some additional heavy Cavalry to add to the army. To be honest, I love my Pike units, but I almost reached a point (pun intended!) where I wanted to chuck the whole lot in the bin. I wish I had bought the cast pikes rather than open handed figures I went with because the pins I used were not only incredibly difficult to attach but are also very painful when trying to move a unit on the table. The units may look spectacular, but they are a nightmare to store safely and are very difficult to game with. These puppies have drawn more blood than any models I have ever owned or painted before!

Anlgo Zulu War
My Zulu War project last year was by far the biggest I have undertaken so far. I painted a LOT of Zulu's and redcoats last year but they represented only small portion of the troops I wanted to complete. In particular I didn't paint any Natal Native Contingent so I have now bought some and will be working on these soon. I'm hoping to add four or five companies to my existing British forces. A lot will depend on how enthusiastic I get for this but I have also bought some Natal Native Horse and some Boar units to compliment my existing troop options. 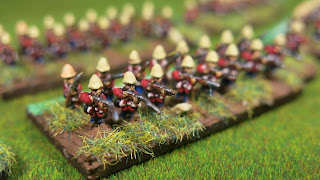 One thing that has been a huge distraction (but but a thoroughly enjoyable one) in recent months, has been a renewed attempt to write my own set of rules for the period. Its been a difficult process but I think I have a working framework in place, although I am still trying to flesh this out in detail. I'm in no hurry to complete this though and when the Challenge kicks off again I probably won't have time for more work on it. I think that putting the project aside for a few months will actually be a good thing because it will give me time to ponder several ideas that haven't been included yet. This is definitely a long term project and one that I will be revisiting again in the new year.

What a Tanker!... in Two Theatres

Earlier this year I started building up a collection of vehicles to play What a Tanker! My main focus has been the war in the Western Desert between the British and Italians during Operation Compass. I have therefore ordered a few  more vehicles and some terrain to continue and expand this project.

I have also been revisiting the idea of playing some Normandy Campaign games using this rule-set. I already have a selection of Tanks from the period and quite a lot of terrain but both need expansion. Some of this featured in my first play-test of the rules but I need to add some terrain if I hope to run a large game for the Rejects. The first additions in terms of armour have been ordered along with some pre-painted terrain to expand my current collection. I'm even considering some ideas for more scratch built terrain (more Boccage!?). A lot will depend on how much progress I make during the Challenge and how motivated I am! Watch this space.

So have I come to any conclusions?
Today I have spent a couple of hours working on my plan for the Challenge and I feel much more focused as a result. At the very least I now have a clear to-do list down on paper rather than vaguely tucked away in a corner of my brain (a scary place with lots of cobwebs). I have a lot of prep to do before the Challenge starts but I feel confident I'll be able to hit the ground running when the starting pistol fires.
Posted by BigLee at 14:29