I'm putting the brushes down for a couple of days for a long weekend away with the family. We're not going anywhere glamorous its really just an excuse to get away from work and let the wife loose for some retail therapy... of course I have my eye on a couple of local games retailers as well. This means I won't be working on anything for the Painting Challenge for a few days, but there is method to my madness.

I've been keeping the pressure up on myself since the Challenge started in December and I need a little enforced time away from the workbench to recharge my batteries. I have completed my Pyrrhic army and Monday should see my final submission of 6mm figures for this project. Then, when I get back from this trip, I can start all fresh on the project that will take me through to the end of the Challenge on the 20th March - Operation Compass, the British offensive against the Italians in western Egypt and Cyrenaica (Libya) in December 1940 through to Feb 1941. 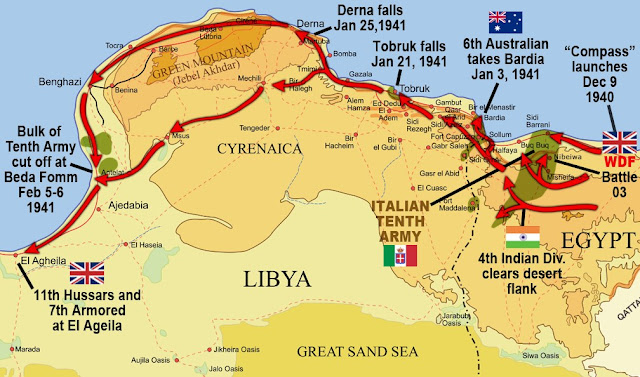 I have been wanting to do some games from Operation Compass for a long time but had other projects that needed finishing first. With them out of the way I can finally focus on one of the most complete allied victories of WWII, that has somehow been overshadowed by later victories. This was in no small part due to Churchill's speech after El Alamein that said that "Before Alamein we never had a victory. After Alamein we never had a defeat." The perfect words to lift a war weary nation, if not strictly true.

Churchill's rhetoric aside I have always found this British offensive massively interesting. These are the days before Rommel, before the defeats that left the front shifting back and forth for two more years. This was the perfect example of asymmetric warfare with a small highly trained and disciplined army defeating a much larger army of poorly lead and poorly motivated troops. I'll be starting off with just a couple of companies of British and Italian tanks and will build up from there. I can't wait to get started!
Posted by BigLee at 07:47