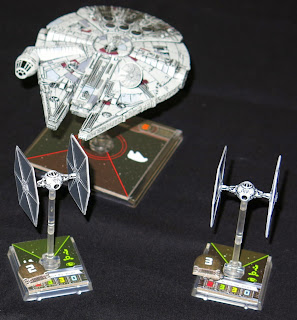 At the weekend I took a bunch of raw recruits and put them through their paces with a short but brutal space battle. I wanted to use my newly purchased Millennium Falcon in a quick four player game with the young Padawan, my eldest daughter and her boyfriend. We played the basic game because half the group were completely new to X-Wing and because we only had an hour or so in which to set-up and play.

I recently picked up a black cotton sheet to use as my game mat for sci-fi games and although I haven't yet got round to painting it - adding stars etc. - it was much better than just playing on a table surface. 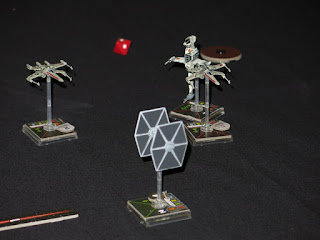 The Rebels had the advantage in term of points but as I'm not a points person I balanced the sides 'by eye' and gave the Imperial players a simple objective; Destroy the Millennium Falcon at all costs. The rebels would have to kill all the Imperial fighters to win but the Imperials only had to destroy one, the Falcon...the question was could the two Imperial players (my daughters) co-operate and execute a plan to win?

The Table was set up with the Imperial fighters split into 2 groups either side of an open asteroid field. The asteroids were spaced wide enough that a well handled fighter could get through them but the Falcon couldn't. The Millennium Falcon was placed at one end of the table and at the other end were the remaining rebel fighters. The Rebel fighters would have to join forces with the Falcon and try to protect it, if they could get to her in time. The problem for the Rebels was that the only gap in the asteroids wide enough to accommodate a YT-1300 was therefore an obvious choke point. 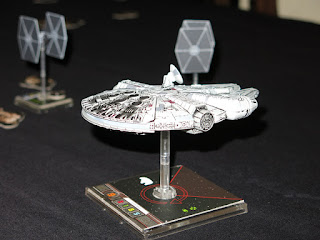 More experienced players of X-Wing are probably rolling their eyes at this point but remember everyone has to start somewhere and three out of the four people round this table were non-wargamers. Indeed for my eldest daughter and her boyfriend (both 19 and from the 'PlayStation Generation') this was actually their first ever tabletop wargame!!

So what happened? My partner in the game was Perry and he decided to attack and destroy the TIE Fighters on his side of the asteroid field before they could join forces with the rest of the squadron. I meanwhile decided to run hell for leather towards the gap in the asteroids in the hope of outrunning my pursuers. Unfortunately the Imperial players didn't cooperate very well (they are sisters after all!) and kept their forces divided. The result was the piecemeal destruction of the Imperial squadron. However the Falcon did eventually come very close to destruction with some uncanny shooting from my Eldest daughters TIE's (her dice rolling skills must come from her mother!).

The game lasted about 45 minutes and everyone seemed to have a good time. Surprisingly the older 'kids' seemed to enjoy themselves and for gamers more at home with buttons and consoles they took to the game very well. I'm not claiming to have converted them (brought them over to the Dark Side?) but maybe they now realise that 'Gaming' is more than just flashy graphics and sound effects.
Posted by BigLee at 10:13