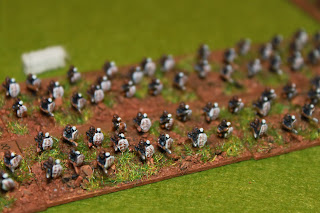 Posties Rejects gathered over the weekend for our first game of the year, and once again Postie pulled out something new from his collection for us to play with. This game used The 1879 Zulu War and Boer Zulu Conflict rules written by Richard Tory for 15mm wargaming, ably adapted by Postie for the 6mm scale figures in his collection. I think this scale suits these sorts of battles really well with massive Zulu regiments that completely dwarf the Imperial forces arrayed on the games table.

"The sentries report Zulus to the southwest. Thousands of them."

Setting the Scene
Part of Number 1 Column under the command of Colonel Pearson is heading into Zululand and the Zulu's have sent an Impi to stop the invading army. Historically the Zulu army was much smaller in this area and the British force should be twice the size represented, but in order to facilitate a challenging battle - and to test posties adaption of the rules for this scale - the number of warriors facing each other have been changed. The game starts with the Imperial column flanked by various mounted volunteer units slowly making its way into Zululand. Meanwhile the Zulu Army has been watching the column and has picked a suitable ambush location. The Imperial forces are strung out in a long column and the Zulu Impi appears suddenly on the surrounding hills, almost as if they sprung from the ground like a swarm of ants.

This is the point at which we called it a day and conceded defeat. Well I did, Surjit was still under the impression (some would say delusion) that we could drag victory from the jaws of defeat. He was ready to fight to the last man and, given a enough time, I'm sure he would have had a chance to do just that.

Analysis
This was always going to be a tough and bloody engagement pitting British Discipline and firepower against the incredible bravery and vast numbers of the Zulu's. In essence this should have been a simple strategic situation for both sides; The Zulus closing with the invaders as quickly as possible and the Imperial forces using their massed volley fire to destroy the massed ranks of the enemy. But as is the way with wargamers I think we all over analysed the situation and made the battle more complex than it really was.

I can't really speak for the Zulu commanders but on the Imperial side there was some brief discussion of strategy, with Surjit initially wanting to engage the Zulu left flank. In the end I was able to persuade him that any engagement of the Zulu's would be suicidal. Instead we agreed to to form up in two disciplined lines and then fall back into a single defencive perimeter to maximise the length of time we could pour firepower into the enemies ranks. When play commenced this simple plan was adhered to for approximately 30 seconds, a new record for my comrade in arms! I immediately pulled back my Natal Mounted Volunteers and reformed them as dismounted units in the line with my regular foot units. They survived most of the game and were able to add their firepower to the battle until the very end. The two Mounted Volunteer units under Sujits command (on the right hand side of the table) were not withdrawn and were consequently wiped out in melee in the first turn for little gain.

Initially Sujits foot companies were lined up as I thought we had agreed but over subsequent turns rather than falling back and keeping a good distance from the enemy he moved his units forward and to the right (ie away from my half of the command). He did this to support the valiant efforts of the Natal Native Contingent which was doing incredibly well on our right flank but in so doing this opened a huge gap in our centre that we would later find very hard to plug. I don't think either of us realised how serious this would be but I also think Surjit was unrealistic in his assessment of how effective our troops would be in a melee. No matter how good our infantry were with their bayonets, nothing could change the fact that they were outnumbered fifty to one and with such odds a close quarters fight could only ever go one way. Even if the unimaginable had happened and we had won a melee with incredible dice rolls, our losses would have been unsustainable. And this was the simple calculation I had made when I said "do not get into melee with the Zulus" back at the beginning when we had discussed strategy.

This was a very hard fought battle and although the Zulu's could claim a victory it was a minor one and certainly not a sustainable way to wage war. By the end of the game they had lost over 30% of their army, somewhere between 3500-4500 warriors. King Cetshwayo would most certainly not have been happy to have lost so many brave warriors.
Posted by BigLee at 16:19