If you're going to play in 6mm you need 6mm terrain. On the whole scaling down terrain in proportion to the models has no obviously appreciable effect on the rules but its worth discussing various elements in turn.

Open Spaces - Grassland or Desert
The whole table is an open space which is why we need terrain to fill it up. With 6mm terrain a battlefield can seem very open and exposed although maintaining existing movement rates does minimise the effect this has. The rules for Going to Ground mean that units can effectively gain cover in the open by remaining still and seeking out the slight lumps and bumps in the land surface to conceal themselves from the enemy.

Vegetation  - Ploughed fields and Crops
Fields in 15mm scale always look pitifully small to me so keeping the same size for 6mm looks more realistic and of course helps provide something interesting to break up the monotony of the plain tabletop. I have yet to find any manufacturer who makes suitable fields of crops for 6mm (please correct me if you know of any) so it will be probably be necessary to make your own.

Woods and Forests
Again larger areas of woodland are easier to fit on the table for 6mm games but its important that trees can be moved to enable movement of bases through the perimeters. The normal rules for movement through rough terrain and for concealment are unchanged.

Hedges and Walls
These are relatively small features even at 15mm, scaled down to 6mm they barely register as terrain. But its important that these feature are included on the battlefield because of the role they play in the rules as barriers to movement and potential bogging points for tracked vehicles. 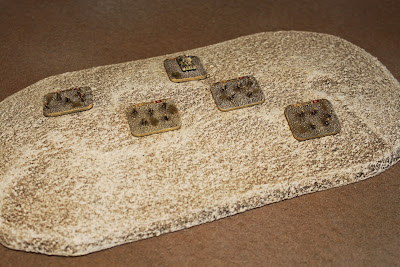 Hill terrain can be much more dramatic in a 6mm battlefield allowing for more vertical height when compared against the miniatures used. However for small hills or undulations in the landscape its best to keep the height shallow.

Banks, Gullies and Cliffs
Representing 'negative elevation' terrain such as gullies (or wadis) is always going to be a problem for those of us using a table for play rather than special terrain boards. There are models available that use vertical formations to represent negative features but another solution would be to use some of the many 'dungeon floor-plan' graphics available to Roleplayers. Many of these are freely available on the Web and the advantage of a downloaded graphic is that you can print it out as many times as you need to create as much terrain as you need. I haven't tried this yet myself, but its on my to-do list and I think this would look much better than a modelled alternative.

Water Features
Existing 15mm river terrain can be used for 6mm games and, in the case of wide rivers, actually looks more realistic. However for most of my North Africa games I don't expect to have anything more substantial than the occasional oasis on the table. 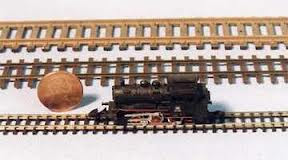 Roads and Railways
Z Gauge railway track can be used in 6mm games and is pretty accurate scale wise. If you are lucky enough to live near a specialist shop you may be able to pick up some of this. Otherwise you'll have to fall back on the Internet for options.

Roads are also difficult simply because most of the examples I own or have seen on sale are for larger scales and have surface detailing (wheel ruts mostly) suitable for 15mm or larger. You may have to resort to making your own if you can't find a suitable ready made product.

Roads of course are an aid to travel and wheeled vehicles can move faster on them than cross country. Rail lines however count as rough ground so crossing them could result in a bogging check. 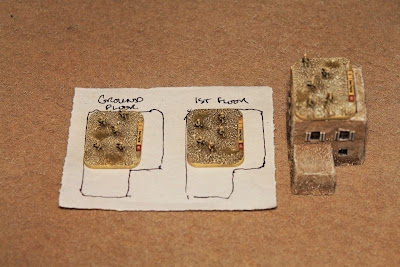 The only exception is where buildings are concerned as most 6mm scale buildings do not come with removable roofs and internal compartments for figures. One alternative is to draw out the floor plans of any buildings ahead of the game and keep them beside the table during play. Any teams that move into a building can be placed on the floor plan to show their position. In the example shown here on the right all three accessible levels of a building are occupied by infantry. In all other respects the rules for movement into and within buildings remains the same.

Table Size
This isn't a terrain issue or even a rules clarification but this seems as good a place as any to discuss table sizes for 6mm FoW games. The logical assumption when using smaller scales is that you can use a smaller table, and for some games that may be a possibility. However as I am keeping all the ranges and movement rates the same as their 15mm cousins I think regular sized tables are worth considering. Of course this can mean that tables remain large but seem empty with lots of 'unused space' but I have always thought that many 15mm FoW games look very cluttered and not very realistic. More space on a table means there is more room for manoeuvre and suddenly movement becomes much more important in a game.

Its also opens up some possibilities for using 'blinds' to represent hidden movement and fog of war. Is that cloud of dust on your flank an enemy unit or just a sudden Khamsin wind whipping up the sand? This is a subject I'll come back to at a later date, when I have had a chance to give it some more thought and work out some serious rules for their use with 6mm FoW games.

Next week (hopefully) I'll be discussing the rules for Movement and looking at why I think the existing movement rates work really well at 6mm.
Posted by BigLee at 14:03