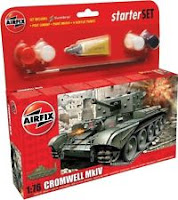 Well I've paid my last respects to Model Zone and it was a very depressing affair. That's not to say I didn't leave my local shop without a bag of bargains but it was sad to see half the shelves empty of stock like that. More importantly I felt really bad for the staff in the store. I've been in their position myself many years ago and its not an enviable one. I had a quick chat with them while I was paying for my stuff and wished them well but that's little comfort when they are faced with unemployment.

I really should have gone to the store last week because there wasn't much left that I wanted (most of the Vallejo paint had gone) but I didn't want to leave empty handed. So I joined the other vultures circling Model Zones corpse and picked up a few items as a last huzzah to yet another high street victim of the ongoing 'recession that isn't officially a recession but bloody well feels like it'.

I bought a 1:72 Airfix Cromwell Tank to paint up as a display model and some Tamiya spray paint to base coat it with when its assembled. I'll see if I can get the Young Padawan to join in and build it with me. I also bought her one of the Revell mini kits mainly because she seemed to like building aircraft and because I think the Fokker DR I is an interesting and evocative plane. If she continues to show an interest I'll see if I can pick her up something a little more challenging at the next show I attend. 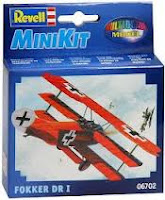 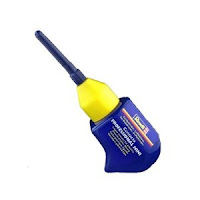 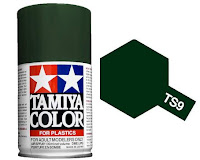 I was never a big spender at Model Zone but I did go there regularly to stock up on sundry items like flock, glue and paints. Personally I always thought the stuff it sold was a bit overpriced and certainly couldn't compete with other retailers or the Internet. But it did carry a reasonable variety of items in its stores and was my main 'local' source for modelling paint and materials outside of trade shows. Its other main selling point as a brick and mortar store was that it wasn't Games Workshop. With the departure of MZ I guess I'll just have to stock up when I go to shows in future.
Posted by BigLee at 16:03