Back to the Workbench

I've not really got a lot of painting or modelling done in the last few weeks, mainly because other stuff keeps getting in the way. Its not all the fault of work, I have also been trying to get a few other (DIY) jobs done and we have been out and about with the kids a lot recently. I'm not sweating it though, if I felt I had to spend a set amount of time at my desk every day it would cease to be a hobby and would quickly become a chore. Having said that I am keenly aware that I haven't progressed with any painting projects for a few weeks and was determined to make some headway this week. 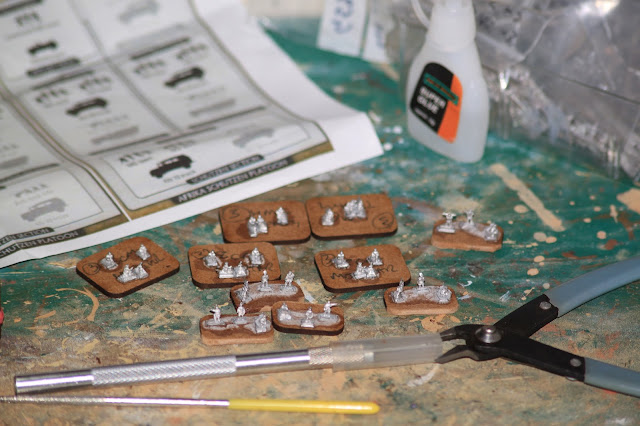 I've started to based my Afrikakorp Infantry Company that I ordered and received from Heroics and Ros a few weeks ago. I usually base all my infantry before painting them rather than following the traditional method of painting them first. It works for me and and avoids any 'accidents' when painting the groundwork at the end. The other advantage is that I can get everything out on the workbench and see exactly what needs painting and what progress is being made.

Its going to be another busy weekend for me and the family, as we are going to the Military and Flying Machines Show in Rainham. This is a great little 'local' living history event, just 15 minutes drive from my home. I say 'little' but its growing every year with more and more vehicles and aircraft on display. I'm hoping to get some painting done on Sunday although, weather permitting, I also have more work to do in my garden.

UPDATE: I've just checked the website and it confirms they will have the B17 Sally B doing a flyover at some point during the day. They will also have a Spitfire Mk9 and a Hurricane at some point over the weekend plus a variety of other aircraft on the ground and in the air. They will also have a wide selection of vehicles in attendance including a Cromwell Tank, the "Warhorse" Mk IV Tank from Bovington, A Stuart M5 and M3A1, A Hellcat tank destroyer, a T34, an M8 Greyhound armoured car, a Chieftain Tank and lots more.
Posted by BigLee at 06:27