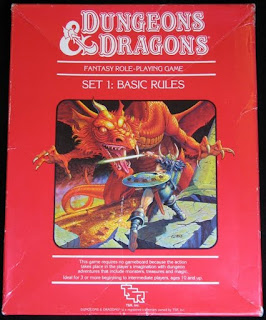 It's never too early to introduce your kids to the games we play. Both my girls have grown up with their 'old mans' strange obsession with toy soldiers, but both have also painted miniatures and played games themselves. I might not have made lifelong gamers out of them but hopefully they have a better understanding of the hobby than regular folk.

This weekend I decided to run a quick and easy D&D game with my youngest daughter - or my Padawan Learner as I like to refer to her. She's six and has reached the age where she will sit down and play a game properly (she plays a mean game of Zombies). So instead of rushing out and buying Wizards of the Coasts new red box I dug out my old original game. These were the self same books I first learned to play D&D with nearly three decades ago (god I feel old).

I set up a straightforward dungeon based monster bash. It featured a simple objective (retrieve the magic gem) and a series of easy encounters with various archetype monsters and traps. I didn't want to focus too heavily on the rules - she is only 6 after all - instead concentrating on the collaborative storytelling and problem solving side of the game... just how it was designed to be.

She seemed to enjoy herself although I realize that that doesn't necessarily equate to her becoming a lifelong D&D player. However we both had a lot of fun and that ultimately is the main objective of any game.
Posted by BigLee at 09:01