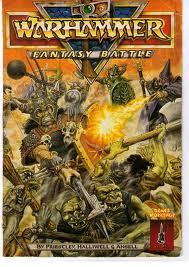 I try to keep all the main rulebooks I buy, even after I stop playing a particular rule set. I don't keep the supplements and additional rulebooks but I do like to keep the original core rulebooks. This is the case with Warhammer Fantasy Battles. I played this when I was still a student (back when my mates and I still had time/money on our side) and kept the book long after we moved on to other games.

My copy of the rulebook was bought for me by my future wife for Christmas 1989 (that's what the inscription says inside the cover). I knew I was onto a winner with this girl because she bought presents I actually wanted for Christmas - as opposed to cloths that didn't fit or were so ugly they frightened small children and animals. Twenty Two years later and she's still buying me toys so I guess I'm pretty lucky.

As far as I know I have only one picture from those early days of wargaming and now I look back and curse myself for not taking more photos. This picture shows a clash between my Undead Army and a Dwarven Army. We used green carpet tiles as our game surface, and played on the floor because we didn't have a big enough table. There's a distinct lack of terrain being used and what little I can see seems to be around the edges for some strange reason. Looking back on these games I don't feel so bad about the standard and amount of terrain I'm using today. 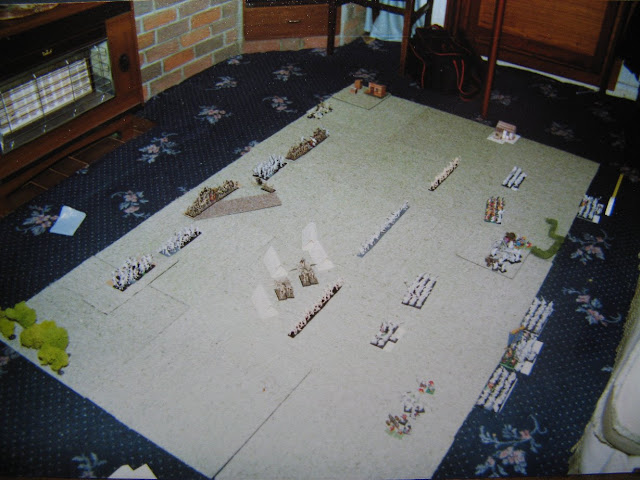 Scanning through the rulebook I found myself immersed in the artwork once again. Much of its not quite up to the standard and presentation of rulebooks today but even so it's evocative and exciting and I can easily understand why we were all hooked on these rules for years. Sadly we moved away from WHFB. One of the reasons was the lack of space and the fact that none of us could paint fast enough to field a whole army. So we eventually moved on to Warhammer 40K Epic and 6mm wargaming. The terrain got better, a greater percentage of our forces were painted and we were able to move the game off the floor and onto a table. Heady days indeed!

Even Epic eventually got left behind. Finding the time and the money to field large armies proved too much and as a group we moved on to other games before going full circle and restarted playing D&D, the game that made gamers of us all. Now of course I have resumed wargaming, collecting and painting my Flames of War forces and playing other rules systems and scales with Posties Rejects. Maybe I can get the Dagenham Dungeon Delvers back into wargaming as well. Only this time I'll be supplying all the painted miniatures, the terrain will be much much better and we won't be playing on the floor like a bunch of middle aged Rugrats!
Posted by BigLee at 09:01