The Panzerkampfwagen Panther Ausf. A (Sd.Kfz.171) was arguably one of the best tanks of WWII. The 7.5cm armour piercing shell of the Panther was capable of penetrating 111mm of armour at 1000 meters and 89mm of armour at 2000 meters making the panther a formidable weapon. With a 46km/hr top speed (on roads) it was also fast for a tank of its size - certainly faster and more agile than the feared Tiger Tank. 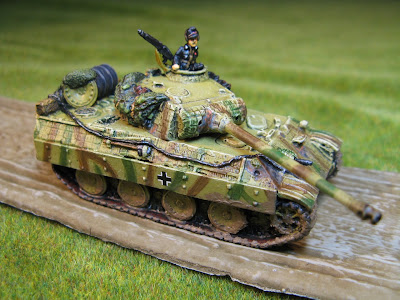 This vehicle has taken some damage and has lost sections of the Zimmerit coating on the hull revealing the bare metal below. Zimmerit was used to protect tanks against magnetic mines. The coating itself wasn't anti magnetic rather its ridged application ensured magnetic mines did not have a secure grip and would fall off under their own weight or the vibration of the vehicle. 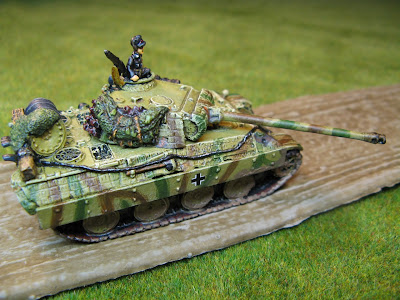 I put the 3 digit identification number on the back of the turret rather than the sides. The crew of this vehicle has hung spare track sections on the sides as added protection. I actually took inspiration from a photo in a reference book that showed this same configuration for the number on a panther covered in spares and camouflage. 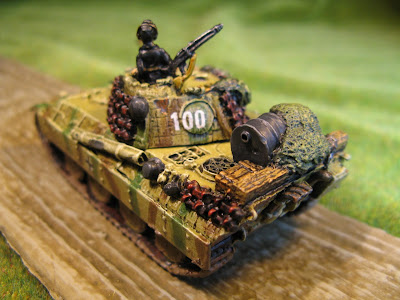 I'm quite happy with how the camouflage looks ob this model. I didn't extend the camo stripes into the 'deck' of the tank and it makes the whole model much brighter as a result. Again this is based on some reference pictures I have that show a similar camo design. 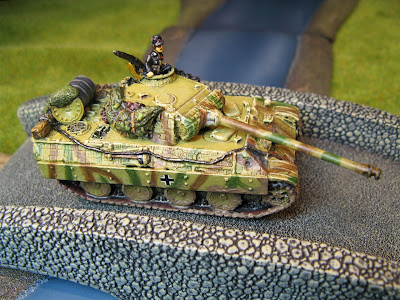 I have a box of Five other Panthers waiting to be painted but I'm holding off painting these until I have finished my next big project.... more on that later.
Posted by BigLee at 09:01