At 12:46 GMT a small asteroid, 10 meters across will buzz by the earth at only 76,000 miles (about a third of the way to the moon). 2010 AL30 was only discovered on Monday but unfortunately for conspiracy theorists and doomsayers it is neither a rogue spy satellite nor the end of the world as we know it. Both would have made for a great game plot hook, although the latter might have interrupted play. 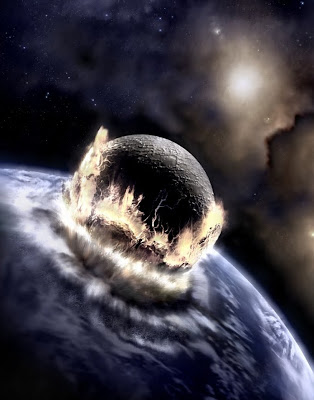 The theme of a cataclysm seems to be a common one in fantasy world settings. I used it in my own campaign and probably the most famous example in a D&D game would be the Dragonlance Setting. Fortunately for us this little asteroid wouldn't pose a threat even if it did hit us square on. Ten meters across seems large but even if it was solid iron it would shatter and explode in the upper atmosphere with only small parts reaching the surface as Meteorites. Even an asteroid 50 meters across wouldn't see us go the way of the dinosaurs, although it would be big enough to wipe out a city or cause terrible destruction if it hit over an ocean.

In fact it would take an asteroid of between 1000-3000 meters to push humanity to extinction. The chances of this happening are remotely small (we're a very small target and Space is very very big) so cancel the Cataclysm. We're safe for now.