Once upon a time a D&D campaign consisted of hacking & slashing your way through a bunch of monsters and collecting as much loot as possible. Back stories and plot development were minimal and there was no underlying meaning to the quest for adventure. Things have moved on since then (thankfully) and plots have become more complex and stories more multi layered.

When I write a campaign I try to get a defining Story Arc settled in my mind before building encounters and options. In its simplest form the Story Arc is a way of getting the Characters from point A to Point B with adventure and rewards in between. These two points can be represented in a number of ways some more traditional than others.

I'd like to put in a bid for another type of story arc, the Morality Tale. Morality tales or Morality Plays were popular in the middle ages and grew as a way of teaching Christian values to a largely illiterate congregation. Later they developed into proper theatrical productions as opposed to illustrated sermons. They were still used to convey a message to the audience but they were no longer a tool of the clergy having moved out of the Church and into Secular society.

Morality tales have remained a popular story telling format ever since, finding a new audience and a resurgence in Victorian England. Nineteenth Century fiction, especially Gothic novels like Frankenstein and Dracula, are classic morality tales that have an enduring popularity because at their core they have a simple message to convey - that good will triumph over evil. 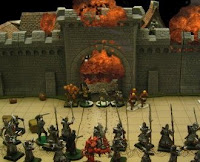 When I first put pen to paper to design my campaign world I had already decided that each story arc would have a theme. The first arc for instance was about the characters becoming more than the sum of their parts. Rising above petty individual desires for the good of the whole. By the end of the story this ragged and battered band of adventurers stood outside the city gates and for a moment were all that stood between the city and a massive army of Dark Elves. In that encounter the legend of "The Hero's of the Slumgate" was born and it was a magnificent moment to behold.

Giving your Campaign a moral message may seem a bit heavy for a mere game but in my experience it can raise a story from being a mundane adventure into a Heroic tale that will be remembered for a long time to come.