The previous two posts that have discussed scale creep have looked at the definition of scale and why there has been 'movement' within the supposedly 28mm group. Much of what I have written so far has been distilled from countless web forum discussions on the subject (some collectors get very hot under the collar about the whole subject). But now I want to look at what this changing definition of 28mm means for the painter.

As a collector of 'cool' miniatures for painting I have quite a few unpainted minis awaiting the brush at any one time. I'm also always on the lookout for the latest acquisition and often this is in the bargain box at shows and conventions. Consequently its not uncommon for myself (and I expect many other painters) to pick up miniatures that have been cast by widely different manufacturers and over a large span of time. Recent purchases of mine have included mid 80's Games Workshop figures and much more recent Reaper models. It is inevitable therefore that I will have a whole range of '25mm' models ranging from accurately proportioned Perry's to Heroic scale Games Workshop models.

Variation amongst scales has two clear effects on a model; proportion and height. In the newer 'heroic scale' models the most significant difference of proportion is the size of the face and hands. However from the painters point of view it is the scale of the face that is most significant. A lot depends on the sculptor but obviously larger faces present a much easier surface to paint. The risk is that the larger features of Heroic scale miniatures can overwhelm the completed model. I have found that using washes to tone down the face helps to reduce this effect. Nothing can make up for grossly ill proportioned models but for regular gaming models this technique works for me. 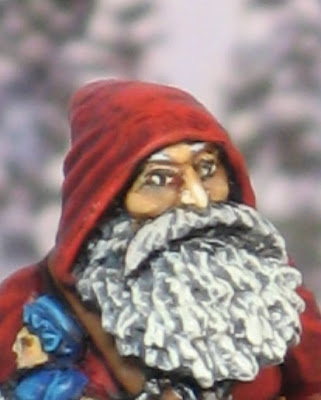 For older, smaller 28mm, models I have been known to resort to not painting the whites of the eyes. Now this may seem like sacrilege to the dedicated painter but for a gaming piece this is an acceptable compromise. For particularly small features the mere 'suggestion' of eyes is enough to complete a face. 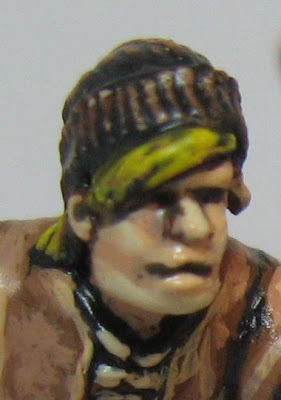 As previously mentioned scale creep effects the proportions of a model but its also, obviously, effects the height of the model. Stand two 28mm models together and its likely they will be different sizes. Some variation is acceptable, after all people come in all shapes and sizes. But with as much as 7mm difference in so called 28mm models height becomes a significant issue. In a full sized human this would be like standing a 6ft man next to one 7 and a half feet tall!!

There is little a painter can do to change the height of a model but it is possible to play tricks with scale by altering the base to make a model sit higher or lower in comparison to its neighbours. This can go some way to 'evening out' differences, but its a technique that has its obvious limitations.

The only sure way to avoid huge disparities within an army or collection of miniatures is to either stick to a particular manufacturer or take a ruler with you when you go shopping!