Part one of this series looked at the definition of scale and briefly discussed some of the more popular scales in use amongst wargamers and roleplayers (and by extension Miniatures Painters). This post will attempt to give some examples of scale creep and explain why and how it has come about.

In the early 1970's the proliferation of manufacturers and sculptors of 'lead' miniatures began to result in lots of variation in scales. Although many 'game' pieces were supposed to be 28mm much variation resulted from the different ways manufacturers measured scale. Some measured 28mm from the bottom of the base to the top of the head, while others measured from the base of the foot to eye level.* For that reason it soon became apparent that miniatures advertised as "28mm" could easily be over 30mm tall. Here is an example of two supposedly "28mm" human miniatures. It is clear that the miniature on the left (Perry) is genuinely 28mm from foot to eye while the miniature on the right (Reaper) is more like 35mm! 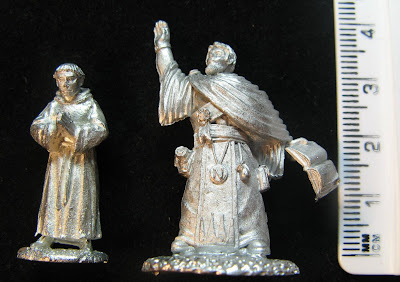 There are two explanations for this upwards trend in figure size. One is technical and the other is to do with marketing... bare with me here. The technical issue is that a larger model is more suited to highly detailed sculpts. Just as a 15mm model will have more detail than a 6mm model the same principle applies to the difference between a 28mm and 35mm model. Here's an example: 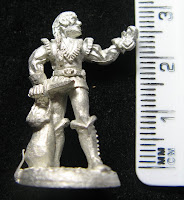 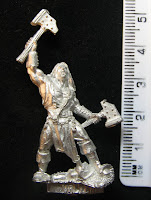 The thief on the left is a 1992 Ral Partha miniature and is 28mm from foot to eye level. The picture on the right is a Games Workshop Barbarian made in 2002 and measuring a whopping 34mm. By increasing the size of the model by a mere 6mm the surface area of the miniature is increased by 25%. (I'm rubbish at maths so this figure is courtesy of my 'genius' daughter). It is easy to see how this can allow more detail to be put into the model.
The second reason for increasing size is that it makes painting easier. The Games Workshop style of slightly exaggerated figures means that models are bulkier with slightly over-sized heads and hands. They seem to look better from a distance such as on the games table. Some commentators have even suggested that this new 'Heroic Scale' version of 28mm was a deliberate marketing decision by companies like Games Workshop because their customer base was 10-14 years old's. The reasoning seems to have been that this demographic, starting in the hobby with no prior painting experience, would find this scale easier to paint. Recent models from the likes of the Perry twins are more proportional and 'realistic' but do seem very 'weedy' when compared to 'heroic' scale models.
Tomorrow I will look at the effects scale creep has on painting techniques.

*This is the method that I use to define the size of a miniature.
Posted by BigLee at 12:00