The Wars of the Roses: Bosworth Project begins

The 13th Analogue Hobbies Painting Challenge started last week and I have started my 6mm Wars of the Roses / Bosworth project. Due to some shenanigans with a delayed parcel delivery I wasn't able to start with Henry Tudor as planned. Instead, I picked a couple of his supporters and their troops. 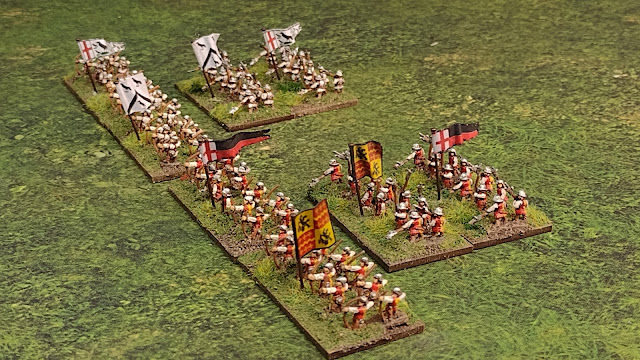 I have been thinking about this project pretty much since the end of the last Challenge in March, and hopefully, the planning and considerable preparation will pay off over the next three months. There is a huge amount to do and in all honesty, I don’t think I will get everything finished by Challenge end. These first few units have taken a lot longer to complete than I thought. However, If I can get at least half the project finished, I will be happy (and hit my personal points target). 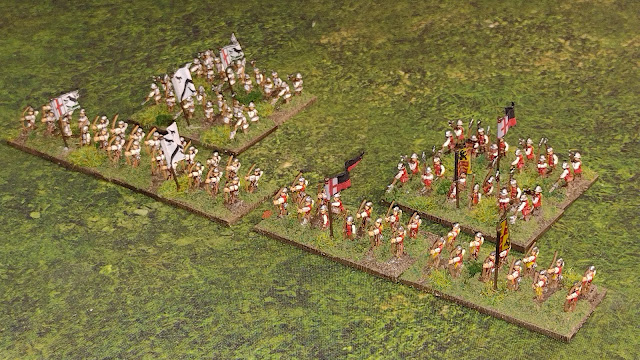 I’m planning on using the Test of Resolve rules for this period so each ‘company’ consists of two bases presented in-line for deep units like billmen, or abrest for wide units like archers. So here we have a unit of Retinue Billmen and a unit of Archers for each nobleman. I have compiled a detailed order of battle for the Lancastrians and Yorkists at Bosworth and when I have finished I will have 38 Noblemen represented on the table with over 125 individual bases of troops…each with their own flag! I decided early on that I was going to use fewer figures on each base to allow for better base dressing with turf and grass etc but to compensate I would have a flag on every base. I may come to regret this decision because that's a lot of extra work…but I think the end result will look awesome and I can’t wait to see it all completed and arrayed on the tabletop.

So today I present the troops of Sir Rhys ap Thomas and Sir John Wells who fought on the Lancastrian side at Bosworth. The former was a Welsh lord who committed his troops to Henry’s cause, but only after the latter had marched nearly all the way through Wales. Maybe he was sizing up the young Tudor and trying to make up his mind? It's claimed that Rhys ap Thomas dealt the fatal blow that killed Richard III but didn't want to take credit for it because he didn't want to be known as a regicide. This claim is hotly debated and given the paucity of reliable evidence I take it with a pinch of salt. Chalk it down as a possibility rather than a probability.

That's enough of me waffling on, I need to get back to my paint desk. I have 117 more bases of troops and flags to be getting on with!