AHPC XI - From the Hatchery to the Armoury

I haven't got as much painting done this week as I would have liked, but I did manage to complete two more 'rooms' of the Chambers of Challenge bonus rounds in the Analogue Hobbies Painting Challenge. Before the competition started I envisaged getting one room done per week, just to keep the points ticking along and to provide a counterpoint to my historical projects. The reality has been that without these little 'side' projects I would be massively behind my WTD target, and aside from my Viking Santa all my entries so far have been fantasy figures for the Chambers of Challenge.

The Hatchery - Werecroc and Brood Nest

Many years ago I started attending a show in London called Dragonmeet. Its amained more at Roleplayers than wargamers and is a great place to see a wide range of products and new games across a range of genres. I hadn't been in a few years, during which the show changed venue and had grown and diversified a little. So when my daughter and her partner asked if I wanted to join them and their friends (all newbie Roleplayers) at this show called Dragonmeet, I jumped at the chance. The show had indeed grown and as well as all the usual rooms filled with gamers playing all manner of ROG's and Boardgames the Trade Hall was double what I had experienced a few years earlier. In amongst the stalls, there were several model companies selling miniatures for Frostgrave and D&D and it goes without saying I was in my element. This figure virtually leapt off the rack into my hands and I had to buy it (by the end of the day I had spent more than the rest of the group combined!). 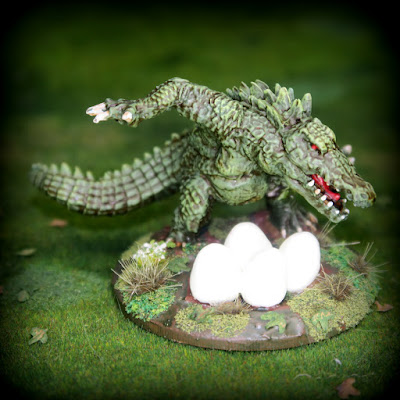 This is a Ral Partha Reaper WereCroc cast in their original 'Bones' polymer plastic. I haven't painted much in this material before but according to their site, this stuff doesn't need to be primed. Call me old fashioned but I couldn't not prime the figure so after giving it a wash I gave it a light coat of brown spray primer. Material aside, this figure demanded to be painted because the sculpt is just so good. I know it is a fantasy creature, but anatomically it just looked so real and menacing I couldn't not paint it. Then when I saw the first room of Level Two in the Chambers of Challenge "The Hatchery" I knew what I was going to do immediately. 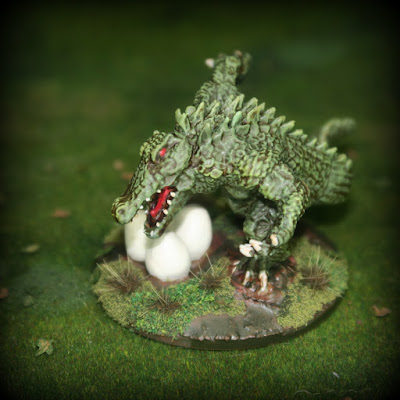 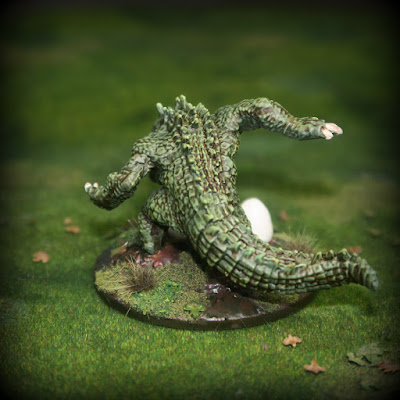 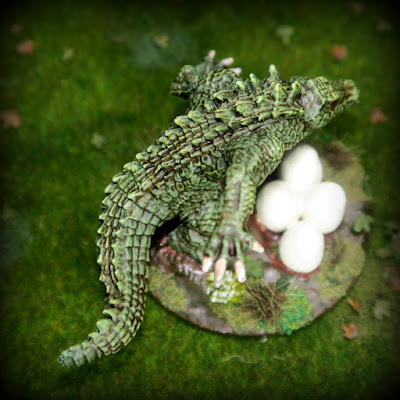 The figure is meant to be 28mm scale but actually stands just short of 40mm tall and comes on a plain cast base. I wanted to add more detail to the groundwork so I added it to a bigger circular MDF base which I then built up with putty. The nest pit was then gouged out while the putty was drying and then I added in some hand made 'eggs' made from Milliput. The eggs are a touch larger than I had originally envisaged, but it has to be said making eggs in Milliput is harder than I'd imagined! Half of what I made were discarded because they were the wrong shape and eventually I was left with four decent eggs for the nest. In case anyone is confused, yes Crocodile eggs are normally small circular and soft, but I had this image in my head of the eggs from the dinosaur nest in Jurrasic Park and besides, its a fantasy creature...its eggs can look however I like!!

Few Wizards will feel bold enough to enter Felstead without the support of their apprentice and a select band of fighters to protect them. Most of the mercenaries, adventurers and trained soldiers they hire will be kitted out with a rough assortment of weapons and often leather or at best chain armour. However, sometimes a little more is needed and if the wizard's pockets are deep enough, and the rewards high enough, they may hire a knight to accompany them. These steel-clad warriors would be the elite leaders in another less magical world, but they remain powerful and impressive figures non-the-less. Rarely are they subtle, and their armour and heraldry often proudly and visibly mark them out to be the toughest fighters. 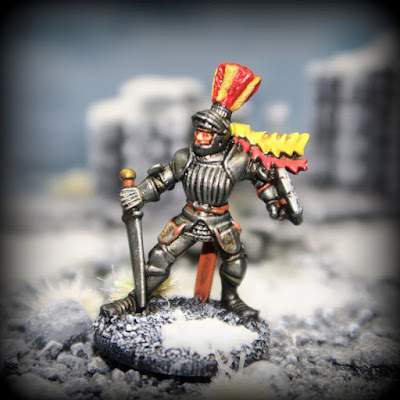 This model is a 1991 Grenadier Knight that I bought years ago, long before Frostgrave was a twinkle in Joseph McCullough's eye. I'm building up quite a collection of figures for use with Frostgrave, sometimes painting whole warbands and sometimes individual figures like this one. I deliberately wanted to keep the paint job simple on this, because I think it makes the maximum impact with that plate armour. The coloured heraldry is also simple, but very striking...this guy is no shrinking violet! 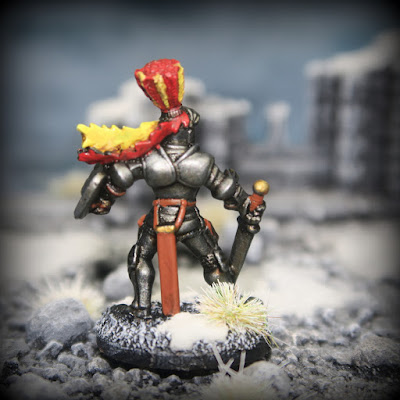 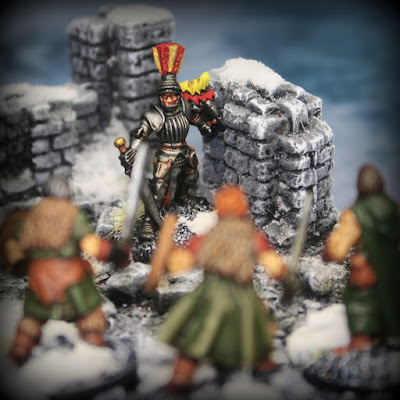 I had hoped to have my first historical figures submitted by now but my first week back to work after the holidays has been... "challenging" shall we say! I have made progress with my 15mm WWII stuff, but the first of these won't now be finished until next week. I'm still on track with my target so it's not the end of the world, and hopefully, things will settle down at work in a couple of weeks.
Posted by BigLee at 12:00