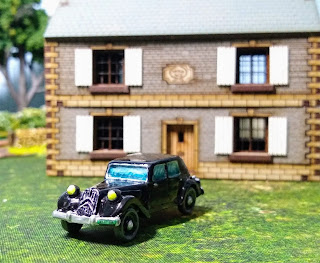 I have been looking for a few small items as 'scatter terrain' for my 15mm Normandy setting and wanted to get myself some civilian vehicles. Peter Pig make this nice looking Citroen and I decided I needed to get it. It's a generic version of the Traction Avant family of cars which began production in 1934 until 1939/40 (resuming again after the war). This Citroen featured front-wheel drive, independent suspension and unlike many of its contemporaries, it avoided the need for a separate chassis (on which the 'coachwork' was built) by adopting a welded unitary body approach. This made the vehicle lighter (70kg lighter than equivalent vehicles) and more fuel-efficient. Its lower profile also gave the vehicle a much sleeker and stylish aesthetic which was quite unique when it first came out. In short its a beautiful looking car.

Production was temporarily halted during the war but resumed again in 1945 and the series continued in production well into the late '50s. Designed for mass production is was cheap enough that a well off farmer may well have been able to afford one so it won't look out of place parked in front of my 4Ground farmhouse. 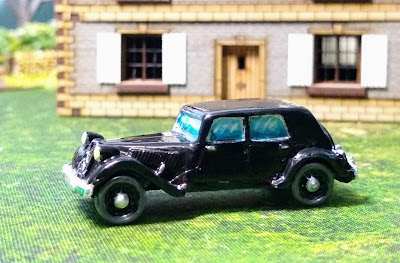 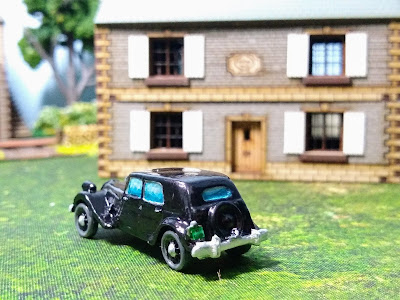 I went for the simple black bodywork because it looks so elegant with its chromed bumpers and fittings. Yellow headlights and green number plates finish the look. As usual, I gave it a couple of coats of gloss varnish but instead of finishing off with a flat matt varnish I only applied Matt varnish to the tires. And unlike my military vehicles, I didn't add any mud splashes...this car has been looked after by its proud owner!