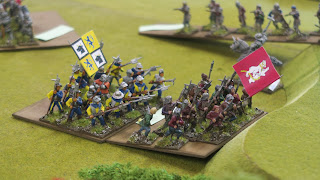 Over the summer I have missed a couple of games at Reject HQ but this Sunday I was able to join my fellow outcasts for a game in the shed-o-war. This time Postie had his War of the Roses figures out and we prepared ourselves for a very bloody clash of arms.

The order of battle for this game was loosely based on the Battle of Towton (known as the Bloodiest battle ever fought on English soil). The game opened with each commander moving the various commands and redeploying their troops. Each command rolls to see how far onto the table it can deploy and once both have moved their troops the commanders roll for initiative. 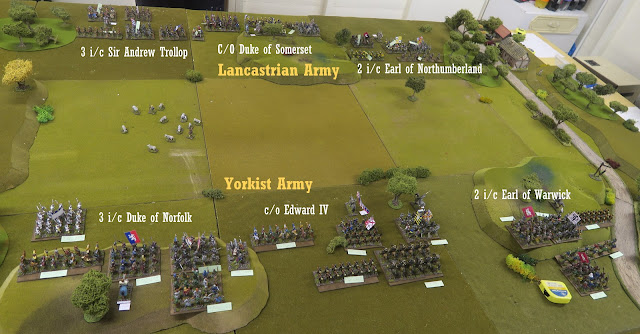 We all really enjoyed this battle, despite the high casualties. I think myself and Surjit felt a 'Minor Victory' was a little unfair because it felt that we had dominated the action all game. In the end, though, casualties count and both armies had been badly mauled by archery and melee.

Surj and I had to change our plan early in the game. Its been a long time since any of us have played this period or these rules so it was quite a shock when we had the first turn of archery fire. It was immediately apparent that we couldn't sit back and wait for the Yorkists to attack, we had to take the fight to them. Fortunately our dice rolling was above-par all game and we won every turn of initiative which gave us a big advantage because we could fire first. Had the game gone another tunr its hard to say how things would have turned out. I was poised to melee with more Yorkists on my flank but in the centre Ray had two archer units poised to rain some hurt on my men.
Posted by BigLee at 14:00