The Battle of Ticinus 218BC 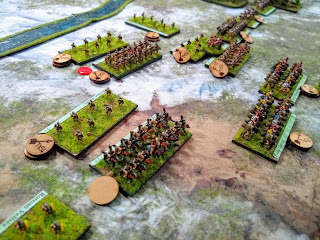 The Battle of Ticinus was the first direct clash between the Carthaginian forces of Hannibal and the Romans (under the Consul, Publius Cornelius Scipio) in mainland Italy. It was a small battle between mainly cavalry forces and is often overlooked from a wargaming perspective. However, I think this is is an excellent little battle that offers some interesting challenges to both sides. The encounter was also significant because success was a massive morale boost to Hannibal's weary troops that were still recovering from the crossing of the Alps. It was also significant in another way that Hannibal could never have imagined. The consul's 18-year-old son, the future Scipio Africanus, first distinguished himself by saving his father at the height of the battle.

Setup
When Hannibal crossed the Alps he had effectively outflanked the Romans under Scipio who had been sent to Gaul to stop the Carthaginian advance. Scipio decided to return to northern Italy leaving most of his army behind to make their own way back along the coast. Hannibal didn't know this and expected to face a full consular army, however, he had to locate it first. Scipio had taken command of troops in northern Italy and the second consul, Tiberius Sempronius Longus, was recalled from Sicily with his army and began to march northwards. However, it would take him 40 days to arrive  (an incredible achievement in itself) and Scipio was confident he could deal with this upstart Carthaginian before then. 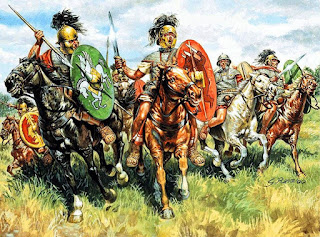 Both sides needed an early victory to consolidate the loyalty of the local Gaulic Tribes, but arguably Hannibal needed this more having lost up to half of his army crossing the Alps. Scipio and Hannibal began to reconnoitre in force in an attempt to find the other army and these two relatively small armies would come together near the Ticinus River. Scipio was confident as his force was larger, albeit a large portion consisting of Velites. Hannibal spotted an opportunity and deployed his small force with the fast, Numidian Light Cavalry on his flanks to wrap around the Romans.

The actual battle was a disaster for the Romans. Hannibals Cavalry charged the Velites who barely had time to throw any Javelins before being driven from the field. Then, as planned the Punic cavalry held the Roman cavalry in position while the Numidians raced around the flanks and hit the Romans from behind. Scipio was himself surrounded, seriously wounded and would have been killed were it not for the prompt action of his 17-year-old son, leading a Turmae of cavalry into the thick of the fighting. The younger Scipio would remember this encounter for the rest of his life and learned an important lesson in not underestimating the Carthaginian General. He would later defeat Hannibal at Zama and earn himself the title, Scipio Africanus.

The topography of the battlefield is open to wide interpretation but it is possible to derive some information from Polybius. Scipio had recently crossed the Ticinus river on a pontoon bridge and faced Hannibal across a flat open area. The terrain in this area would probably have been heavily wooded but Polybius describes the land as open and flat. My map is entirely my own invention, but it fits the descriptions I have read. Incidentally, as the battle takes place in late November, I have decided to use my new winter game mat that I bought from Deep Cut Studio.

Incidentally, the two main sources on the battle are the History of Rome by Livy (Book XXI) and Histories of Polybius (Book III). Polybius makes it clear in his account that he visited the places and monuments and looked at documents.

Order of Battle
This OOB is derived largely from the description of Polybius.

The Romans have a slight points advantage but also have two more bases than the Carthaginians. If I was deploying these troops myself I would have put the Velites on the flanks but I have followed the historical disposition of forces and arrayed the Light Troops in front of the Roman Cavalry as Scipio did.

Analysis
A short but bloody battle that almost completely followed the historical accounts of this fight. Scipio may have had many good qualities (one must assume, as he was a Consul) but clearly, tactics weren't one of them. Putting his light Velites in front, between his and the enemy's cavalry was a properly stupid move and lost him the battle. I may play this game again to see if the dice produce a different result but next time I'll untie the Romans hand and deploy in a more sensible fashion.
Posted by BigLee at 08:39