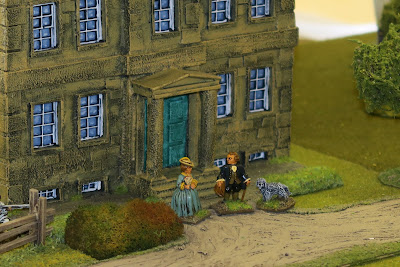 It's been over two years since I have played any American War of Independence games in the shed-o-war (the last one was the Battle of Freemans Farm). I really like this period and the look of the games and Posties collection of figures are excellent. Four Rejects gathered to play with sides being decided randomly before any of us saw the setup. The two C/O's (Ray and Richard) then went into the shed and deployed their forces before calling in the second in commands (Surjit and myself).

The Setup
This is a fictional encounter set around the rather grand looking Hadley Hall...my namesake wasn't too pleased to be having a battle on his front lawn. I've no idea which side he sympathised with but as soon as the battle began he and his family wisely hid in the back yard.

Order of Battle
This is the OOB that Postie drew up for us. To explain the letters next to the units mean the following; E means Elite; V Veteran; and T Trained. The number after that is how many figures are in a unit so you can see there is a lot of difference in sizes.


The Action
I didn't, unfortunately, note down the positions of the various brigades. I have given myself a stern talking to and a slap on the wrist and promise not to be so lax in future! 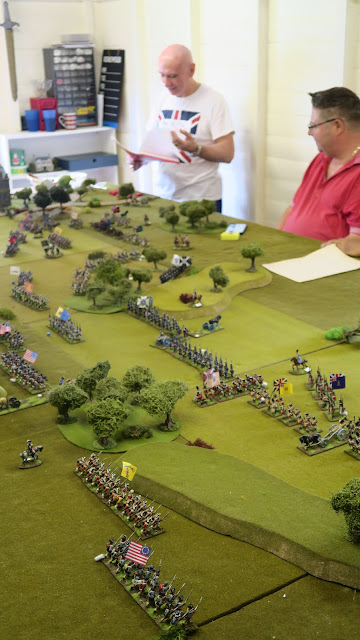 Analysis
Despite being on the losing side (again!) I thoroughly enjoyed that game. I really do like the period and I think Posties home brew rules (called God save the King) work well. Not overly complicated but with enough flavour to give a real feel for warfare in the rebellious colonies. I just hope I don't have to wait another two years before we play this period again.
Posted by BigLee at 21:47