Solo Wargaming - To the Strongest!

Regular readers will be aware that I have been playing more solo games recently and its a trend that will likely continue. I'm still attending games at Posties Shed-o-War but I only average about one game a month, especially during the summer when other events and holidays reduce availability to join the lads for a battle. The young Padawan can occasionally be arm-twisted into joining me for a game of To the Strongest! at home, but if I want to play with my 'little men' more often, solo play is the best way forward. This long overdue article discusses how I achieve realistic games using these wonderful rules. You may have a different approach and as always comments and suggestions are very welcome. 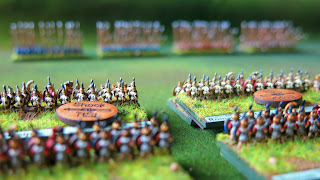 I have played quite a few games solo now and have slowly been developing a method for 'automating' one side so I can play against an opponent that still has the ability to surprise me, or at the very least put up a stiff fight. The rules for TtS! already introduce a certain amount of friction and no commander can say with certainty what he will be able to achieve in any given turn. Careful management of activations and positioning of generals can help, but the dreaded Ace (or 1 if, like me, you use dice), can't be argued with! But this still leaves a lot of room for additional mechanisms to make playing an opposing army unpredictable.

I have used the following ideas in most of the solo games I have played so far, and there is always room for new ideas, although I have no desire to make them too complicated or too random...I want to play a challenging opponent, not a schizophrenic machine that makes completely random, unfathomable or stupid moves.

Make life hard for yourself 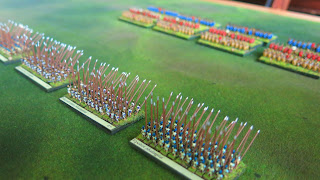 All my games start by writing up an Order of Battle for both sides. I try to do this in a fair way, without giving any side a significant weakness or advantage. However, I have slowly come around to the idea that the 'enemy' needs to have a points advantage to counteract any unconscious bias I may have during the game. It also means that whatever army I play I have to play well to win. Victory is more likely to be genuine and not the result of bias in decision making. How much of an advantage is a matter of debate but through a bit of trial and error, I have settled on between 5-10% extra points for the enemy army. This equates to one or maybe two more units in the field than they would normally have in a straight fight, so a reasonably significant advantage.

Randomly select and place terrain.
To the Strongest! does include rules for removal and movement of terrain after it has been placed. This effectively randomises the position of terrain making its final configuration random-ish. However, I also like to replay actual battles so sometimes the terrain and deployment are determined by the scenario. 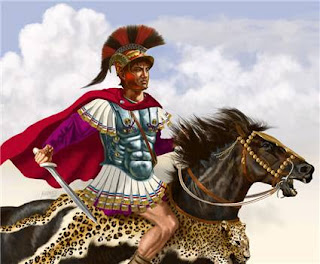 Dice for sides to deploy
If the game is a fictional rather than a historical scenario, then it is possible to ensure any unconscious bias in the setup of terrain can be eliminated by randomising which side each army sets up on. Pick a side of the table and roll to see which Army will be deployed there. Alternatively, flip a coin to decide.

Deployment of Commands.
To the Strongest divides armies into multiple commands, usually three but more could be used for really big armies. Where these are positioned relative to each other (and the army opposite them) is an important decision for the player. Deployment can also dictate strategy, so a strong cavalry command opposite a weak one could prompt an attack. I usually set up my army then deploy the enemy

Dice for the location of the senior general.
The Senior commander's location can have a significant impact on the behaviour of a command, especially if he is a Brilliant General or Great Leader.

The aggression of each command
This something I have tried to do with all my Solo games. Each command may act differently, with one being aggressive and charging, while the others are more defensive. This makes playing the enemy army quite challenging, trying where possible to follow this instruction and turn it into a strategy with a chance to win.

For each command, roll a D10 (or pick a card) and consult the list below:


Strategum Cards
The use of Strategum cards can also add an element of surprise to a game. Of the twelve Strategumss, two are used immediately after deployment but before the game commences. Four others delay the arrival or movement of units, again introducing a random element into the game that the Living player can't predict either in his own forces or the enemies.


Chance Cards
A new idea that I am working on (still being developed) is the use of chance cards to inject subtle effects on the behaviour of enemy units. These tend to be little effects that may provide a local advantage or disadvantage to a single unit.
The nominated unit then pulls a chance card or in my case, I re-use the Startegum chits. The result can be a bit unpredictable and may be an advantage or disadvantage depending on timing. Any chance cards that are not used (by choice, or lack of opportunity) are lost at the end of the turn.

No doubt more ideas could be developed even further, but what I don't want is to make these additional 'rules' a distraction from the excellent ruleset Simon has produced. The solo games I have played so far using these techniques have produced challenging experiences and sometimes unexpected outcomes. For me playing Solo will never be as much fun as playing against a living opponent, but at least this way I can get a game in, learn the rules and justify the hundreds of hours I spent painting my miniatures!
Posted by BigLee at 13:43