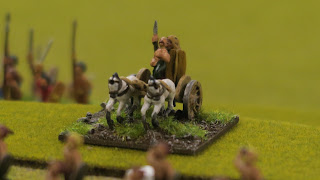 Over the weekend Postie put on a classic encounter between a disciplined Roman army and a bunch of very angry Britons lead by queen Boudica herself. My youngest daughter, the Padawan herself, had asked for this game specifically. She's effectively a fully fledged member of the Rejects now, having been to several games over the last few years. It's getting increasingly hard to tear her away from her tech, but on Sunday she exited the digital realm to get 'old skool' with her Pa. Her only stipulation, she had to be Boudica...and given the determined look on her face, I couldn't argue with her!

The Setting
We played a fictional battle but one that could have been easily replicated during this period. The Romans are vastly outnumbered but have a strong position on top of a hill, with plenty of bolt throwers and archers to weaken the advancing British.

Analysis
Well, that's two games I have lost this year, out of two played. Not a great start! The Padawan played a good game, moving most of her force so that my missile weapons could only pluck away at her skirmish troops rather than the Warbands. Her move around my flank along the forest edge looked like a mistake, but it was actually a ploy to ensure they arrived at the same time as her reserves. The resulting hammer blow that hit my right flank was impossible to resist.

I think its about time she was upgraded from Padawan to full Jedi Knight (or more likely a Sith Lord).
Posted by BigLee at 08:00