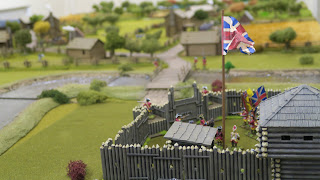 On Friday the Rejects gathered for a rare evening game featuring our special guest Christopher (aka Axebreaker) of Bunker Hill. Chris has been in the shed-o-war before but sadly I missed that game so it was good to meet him this time around. After his previous visit he had already joined the hallowed ranks of the 'Honorary Rejects' but the fact he came back for second helpings means we must be doing something right. Postie put on an excellent French Indian Wars skirmish, and equally excellent supper as most of us had to come straight from work in order to fit this rather large game into an evenings play.

Setup
Fort Christopher overlooks a colonial village and farmland, constantly under threat of attack by the French and their Indian allies.  They expect a raid could be imminent but have no idea where it may come from so at the start of the game, in addition to the garrison, there are several patrols of Light infantry and Rangers widely dispersed across the whole area. Meanwhile the French are using the enclosing woods to spring their attack from multiple points. Their mission is simple; burn, kill and plunder as much as possible.

As always I'll try to start with an overview picture of the initial setup. However as pretty much all of posties table was being used its hard to fit into just one picture.


At this point its worth explaining some basic concepts for how Posties rules work. Turns start with initiative and then each individual soldier has two actions per turn. Moving, shooting and reloading cost one action each and can be used in any order. Running uses two actions. Crossing barriers or opening doors uses one action and troops that do this cannot use their second action to reload. Troops that fire must spend a whole turn reloading so in effect can only fire every other turn. The Indians are best in forests and suffer a penalty in the open, but they are still deadly in melee as most carry two weapons. Bow wielding Indians are nasty because they are accurate and don't have to spend a turn reloading. Troops in forests can move up to the edge and still retain a cover bonus unless they give their position away by firing. So I expected Mark to make full use of this by getting his troops right to the edge of the woods then waiting to win initiative to charge my soldiers while they reloaded.

So have the French/Indians done enough damage to win this game on points?


Analysis
The short answer to that last question is; No. The British ended the game on 108 points, mostly from killing Indians who are worth more points. The French forces did a lot of damage but they end the game on just 60 points so this was a decisive victory for the British! Tactics aside the reason this didn't work for the French is that this was a raid and they would have score points for stolen booty, destroyed crops and burned buildings. They failed to loot a single item and didn't so much as set fire to a haystack let along any buildings. They may have dealt a lot of casualties to the British/Provincial troops but they only did so by completely ignoring their mission objectives!

That was an excellent game and great fun for all involved I think. Once again Posties FIW rules proved simple and easy to understand and resulted in relatively fast play and decisive action.
Posted by BigLee at 17:17