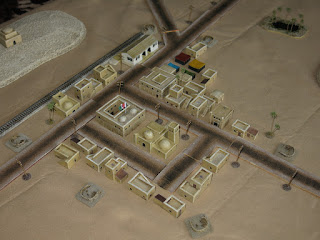 The Young Padawan and I managed to fit in another 6mm wargame today, this time playing a Flames of War battle set in the Libyan desert in WWII. I wanted to give my LRDG trucks a new chance to go toe to toe with the Italians to see what they are capable of. I soon learnt the answer was "quite a lot"!

The Setup
Three LRDG Patrols are converging on a target across the Libyan Desert. The patrols had traversed hundreds of miles of desert together but two days ago split up to approach their target from different directions. Their objective is an Italian held town, regional HQ and communications hub for forces in the area. If the LRDG can knock out their objective the Italian war effort in the area will be severely disrupted.

Analysis
My string of defeats at the hands of my daughter grows every longer! My dice rolling was as awful as usual, whether it was to-hit rolls or saves. The Bersaglieri troops in the town had a big advantage, hunkered down in hard cover making them much harder to hit than if they were in the open. Despite this the massive fire power being brought to bare by the LRDG trucks (every one bristling with machine guns) meant they could quickly overcome local opposition before reinforcements could support them. The Padawan was lucky with her dice roles but in the end that's part of the game and no excuse for my loosing yet again!
Posted by BigLee at 19:09