My latest 6mm Punic Wars troops are Carthaginian (African) Spearmen. These Hoplite units are certainly a colourful bunch and were really enjoyable to paint with lots of detail and lots of varied shields. I used my new waterproof ink pen on the designs and I'm really happy with how they turned out. 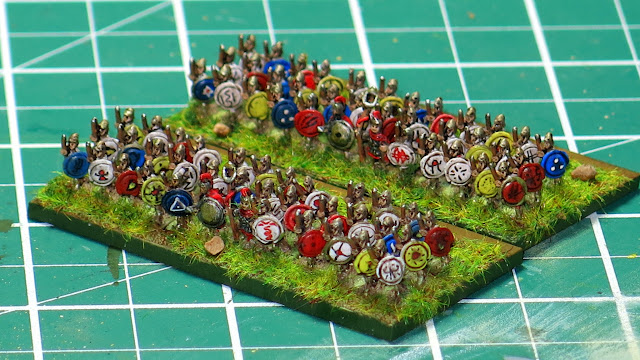 My only (self criticism) of these is that after I had finished I realised that my 'African' spearmen had a distinctly Caucasian look about them! While I would expect a Carthaginian unit like this to have a high proportion of fair skinned troops amongst them (they are from modern Tunisia after all) I really ought to have included a reasonable proportion of darker faces in the ranks. Terribly un-pc of me and something I will address when I paint my next batch of these.

I'm taking advantage of the flexible basing options available in the TtS! rules and while infantry come in various sizes in these rules I have decided that where possible I will base all on 20x60mm bases as my standard. So I have opted to base Regular sized units like these spearmen twelve men abreast, in three ranks. Small units, such as the Republic Roman Principes I painted a few weeks ago, will be based in two ranks and Deep formations will be based in four or five ranks.

So what next? Well my main order of Republic Romans has arrived so I may have a go at some Auxiliary Cavalry next...watch this space!
Posted by BigLee at 12:48