October has been a busy month with my Desert Raiders project moving along quite swiftly. I still have a long way to go - the list of to-do items seems huge - but I have managed to find time to do some reading. However I expect my available free time is about to be cut significantly in November as I have just been offered a job (yippie!) starting in a weeks time. So I have a few more days of leisure to cram in as much as I can before returning to gainful employment. 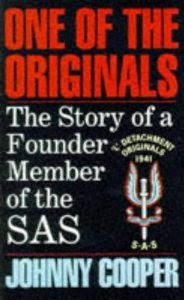 
I was given this book by Clint (Anything but a One) and its been one of the best reads I have had in a while. A hugely enjoyable book brimming with tales of adventure, action, bravado and daring-do. A real Boys Own adventure story, all the more incredible because its true.

The author, Johnny Cooper, was (as the title of the book implies) one of the Original members of the SAS. He had joined the Scots Guards while still under age (having bribed the recruiting officer) and quickly volunteered to join Layforce Commandos in the Middle East. This ad-hoc formation consisted of several Commando units but was soon seen as too unwieldy and was disbanded in August 1941. About this time David Stirling conceived the idea of a much smaller and more flexible force that was to be named the Special Air Service. Cooper was one of the first batch of recruits into this new formation and would serve in it right through to the end of the war.

The authors style of writing is very easy to read and isn't bogged down with masses of technical or operational details, instead focusing on telling the story of their exploits in the desert and beyond. Many of the missions he describes are high risk and high reward and the overriding impression the reader gets is that results were as much about luck and boldness as they were force of arms. That's not to say the SAS didn't pack a punch and time after time they struck airfields and other installations hundreds of miles behind the front lines.

Although danger was clearly ever present there is also a good deal of humour in the stories he tells, especially at the expense of the enemy. One great example is a mission into Benghazi to destroy shipping. They were unable to complete their objective and had attracted some unwanted attention. Trapped inside the port, their only escape route was out through the main gates. On arrival at the gate the sole Italian speaking member of the SAS team told the Sentry that they were German Officers training on Sabotage duties. He then went on to berate the sentry for being so lax on duty and demanded that the rest of the guard be turned out. Several ill attired and sleepy Italian guards shuffled out and were then treated to a tirade of abuse for their lack of alertness. Still stunned by this reprimand the Italians didn't stop the SAS team from walking calmly away from the docks, slipping back into the city where they made good their escape.

I'm not sure if this book has been reprinted since its first edition but its well worth seeking out if you can find a copy.
Posted by BigLee at 08:15